Heparan sulfate (HS) carrying proteoglycans bind to many signaling factors and other secreted proteins. Recent investigations strongly indicate that the degree and level of HS sulfation determine the specificity of these interactions, thereby regulating distribution, activity and receptor binding of the proteins. Unpublished experiments of our group indicate that alterations of the HS structure might have a protective effect on the articular cartilage. Here, we plan to investigate the importance of the HS structure on cartilage homeostasis during aging and in induced OA models by analyzing mice carrying different modifications of the HS structure (loss of 2-O sulfation and epimerization) (WP 1). Like integrin signaling, the HS carrying syndecans act as mechanotransducers in chondrocytes. We will thus investigate how chondrocytes carrying an altered HS structure respond to mechanical stress. To receive insight into how the altered HS pattern is translated into a cellular response, we will generate RNA expression profiles of wild type and HS-mutant femoral heads and of wild type and mutant primary chondrocytes exposed to defined mechanical loading conditions (WP 2). The expression profiles will be compared to those obtained for the ß1 and α10 integrin mutants generated by the Aszodi group to identify common and distinct target genes.

Preliminary experiments also indicated that complete loss of HS leads to a severe reorganization of the extracellular matrix (ECM) and to increased levels of phosphorylated focal adhesion kinase (pFAK), in vivo, indicating disturbed integrin signaling. We will use immunofluorescence and atomic force microscopy (SP1) to investigate if specific alterations of the HS sulfation pattern lead to distinct modifications in the expression of structural ECM components and of the mechanical quality of the ECM (WP 3). As integrin signaling is the main regulator of cell-matrix-interactions we will use immunofluorescence, affinity chromatography (WP 4) and cell culture experiments to decipher how HS affects integrin signaling in organizing the ECM structure and if the sulfation pattern is critical for this interaction. With the experiments outlined above we expect to gain first insight into the mechanisms by which HS and integrin signaling are linked, which integrins are regulated and if the HS structure has an impact on the interaction. Based on the outcome we will cross the most informative sulfation mutant to the respective integrin mutant to investigate the epistatic interaction and its importance for the maintenance of the articular cartilage in vivo (WP 5) (Figure 1). 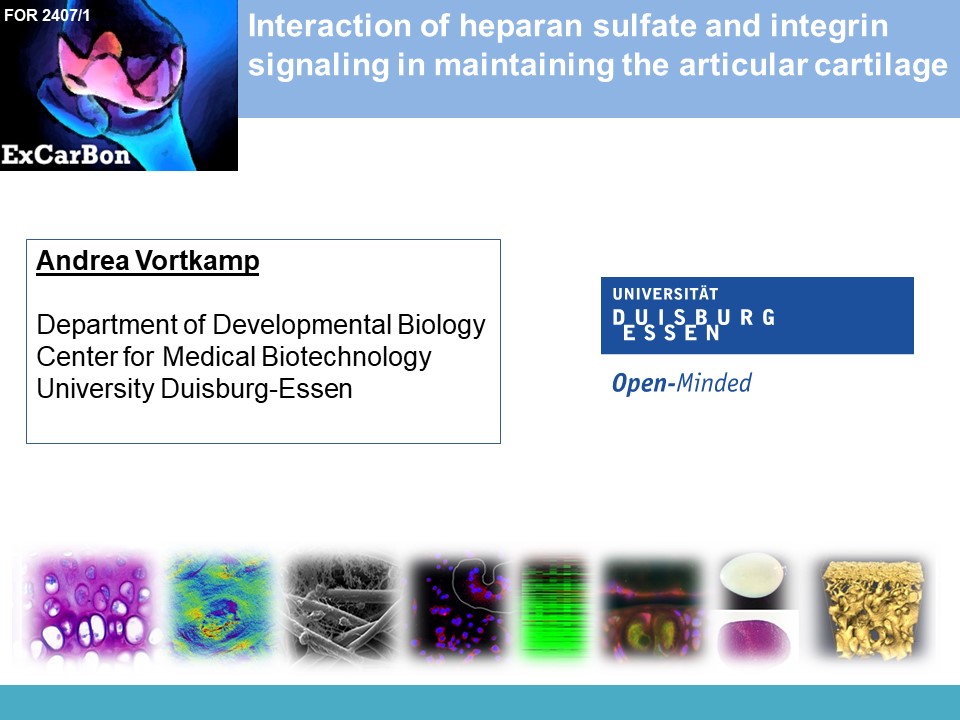 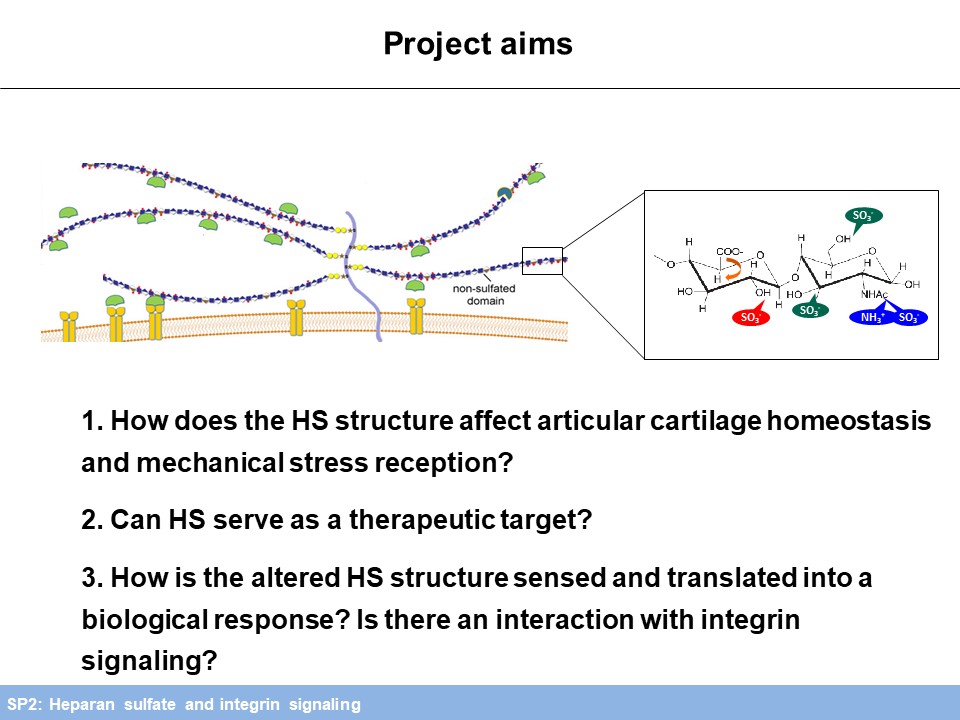 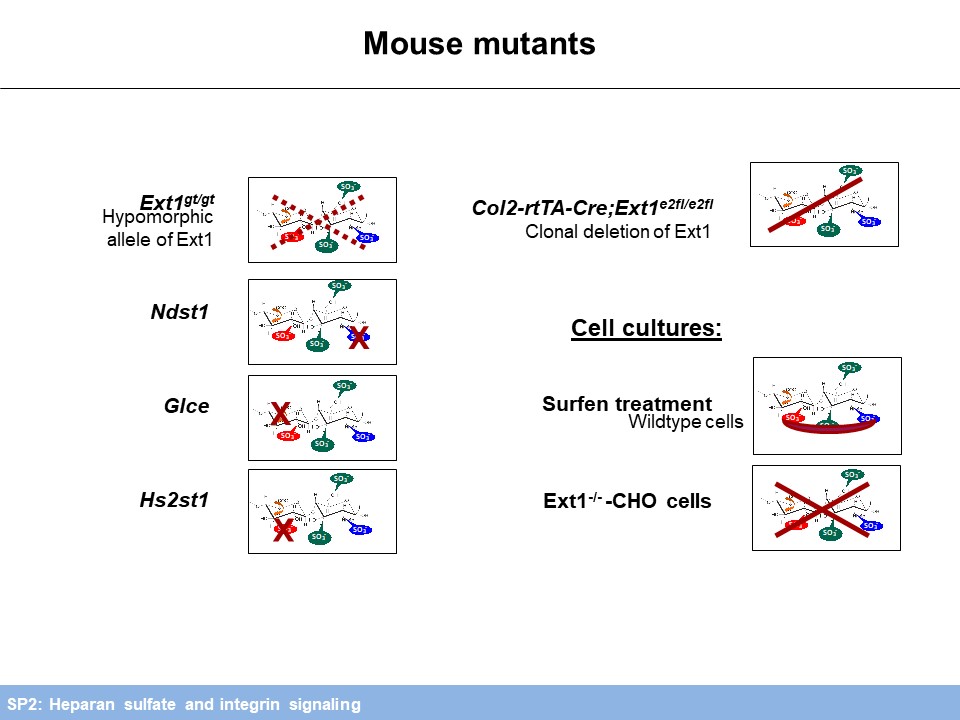 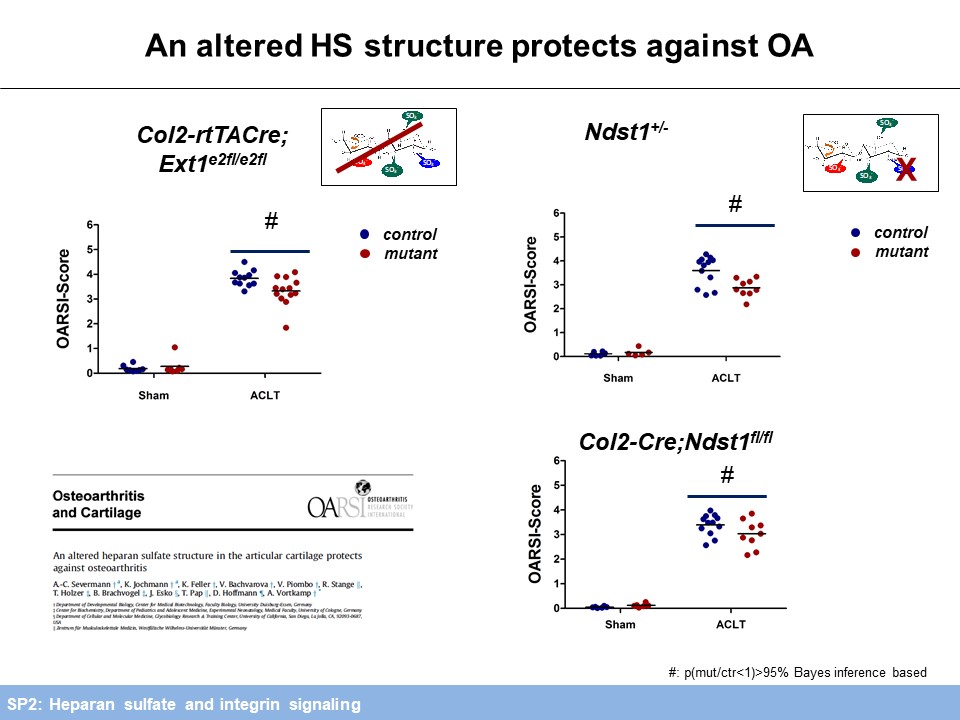 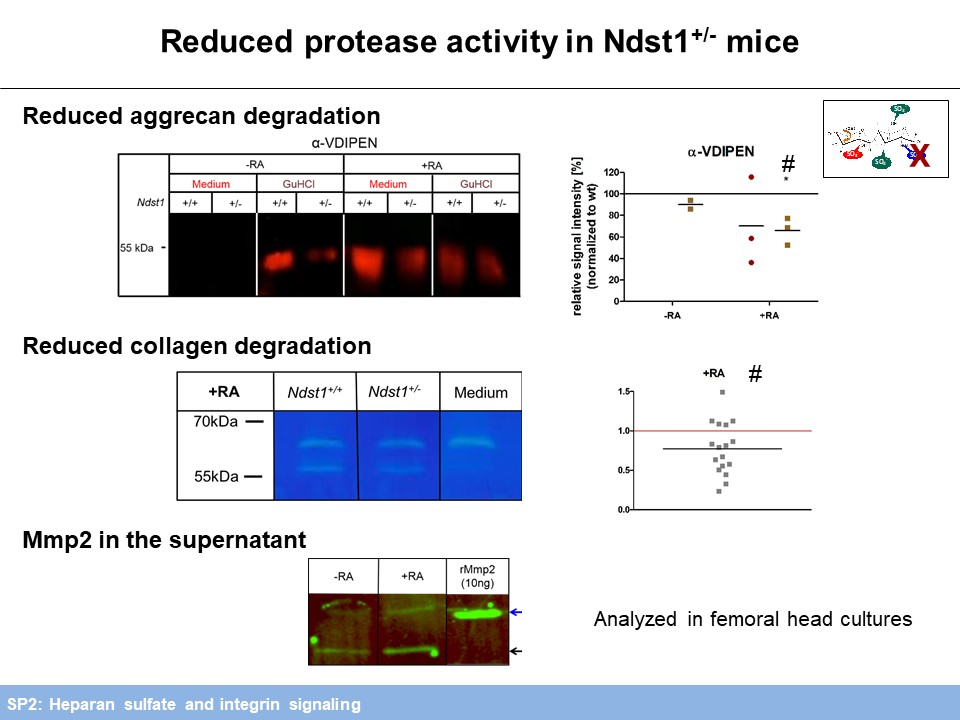 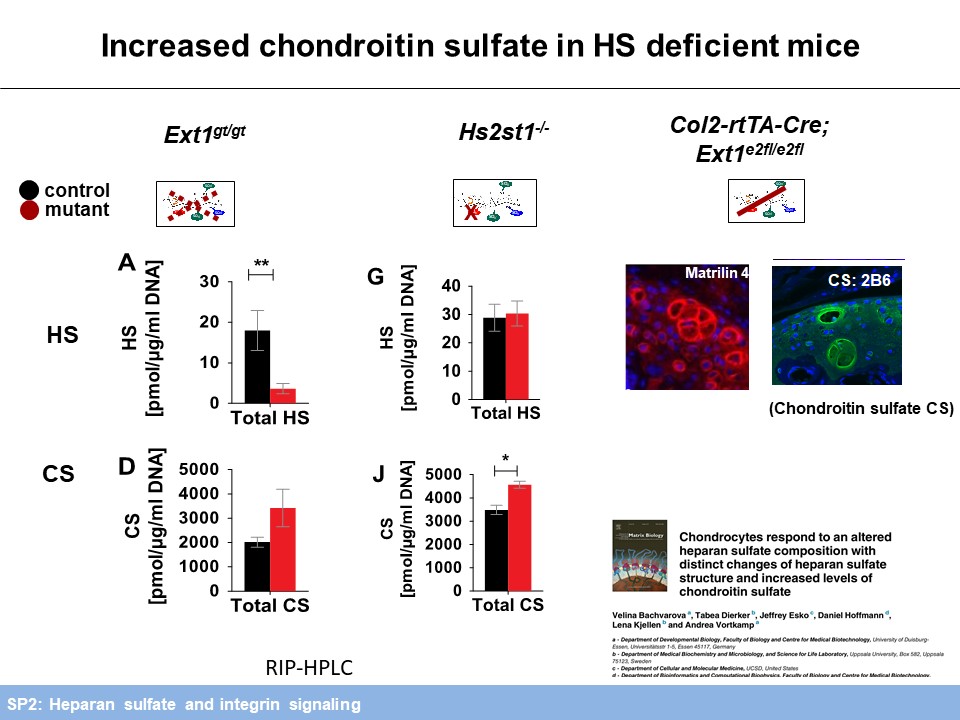 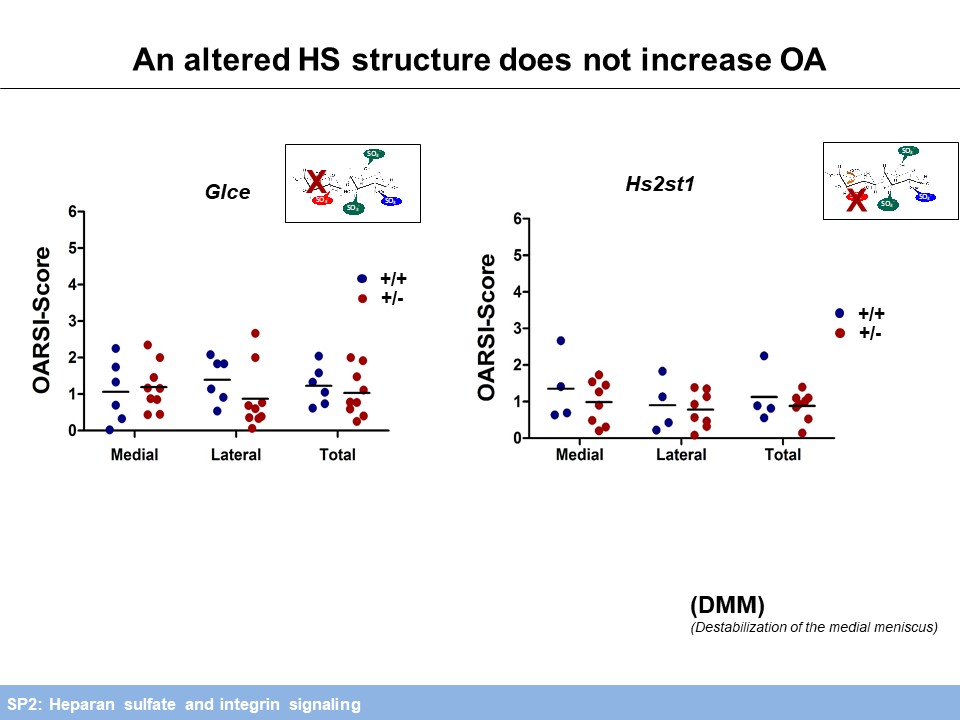 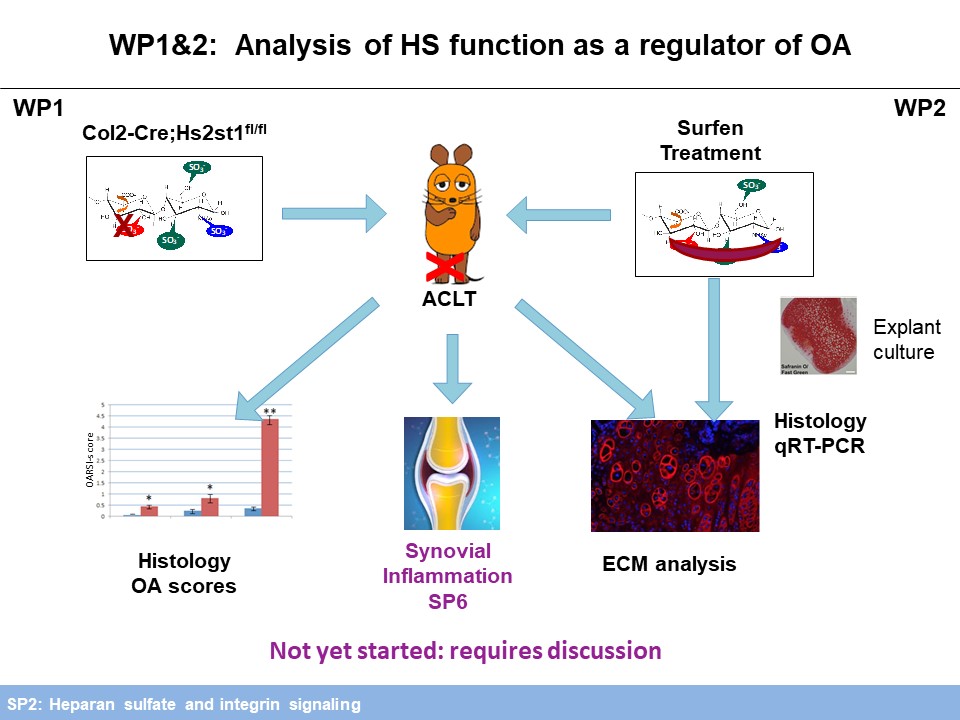 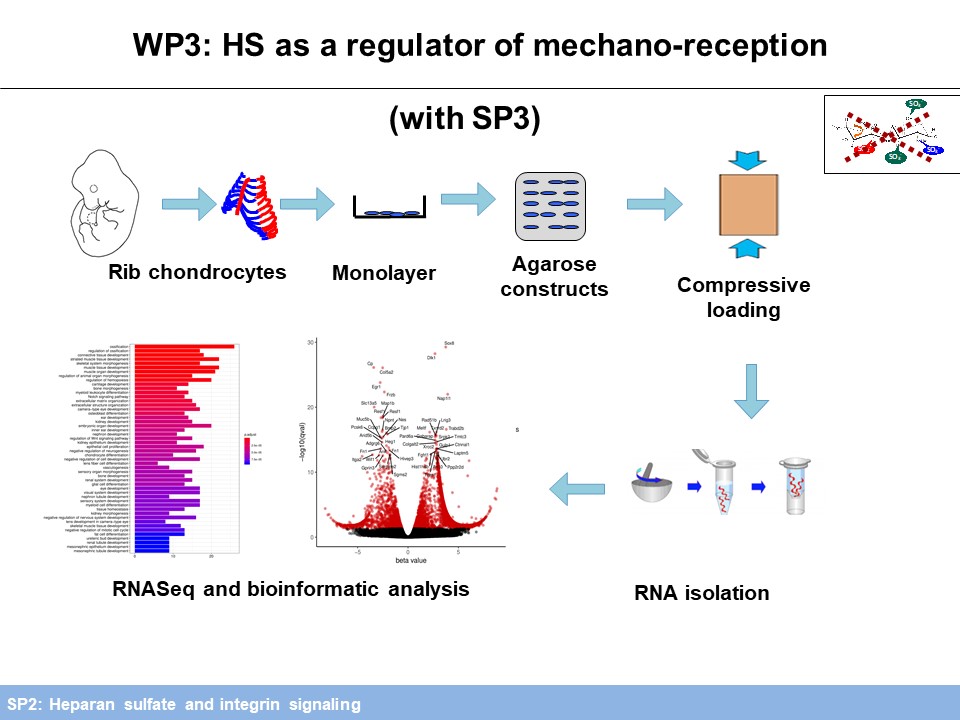 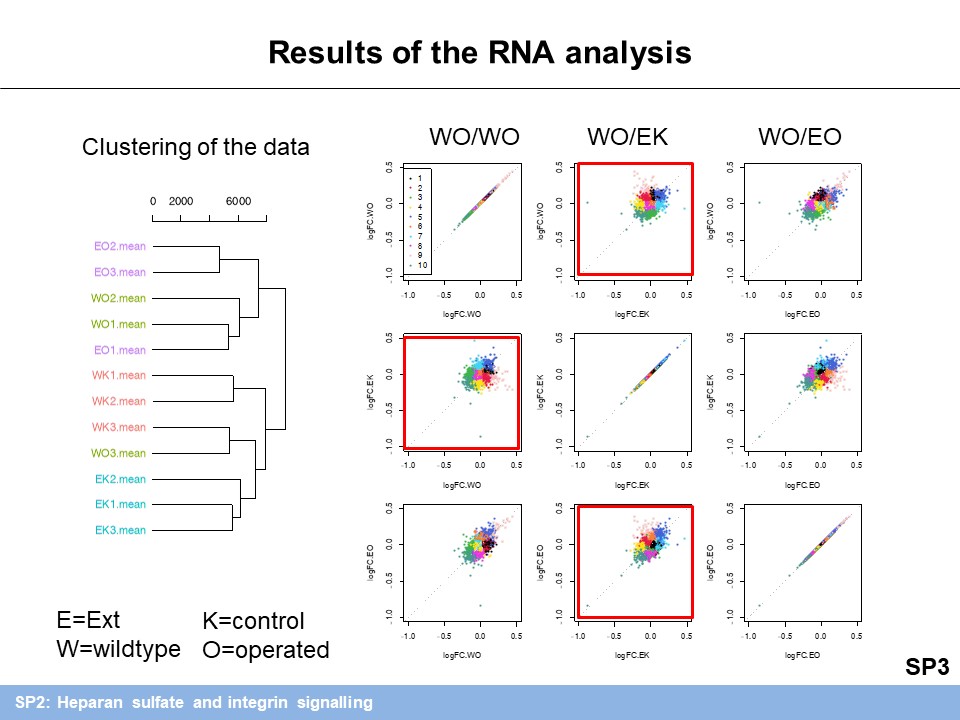 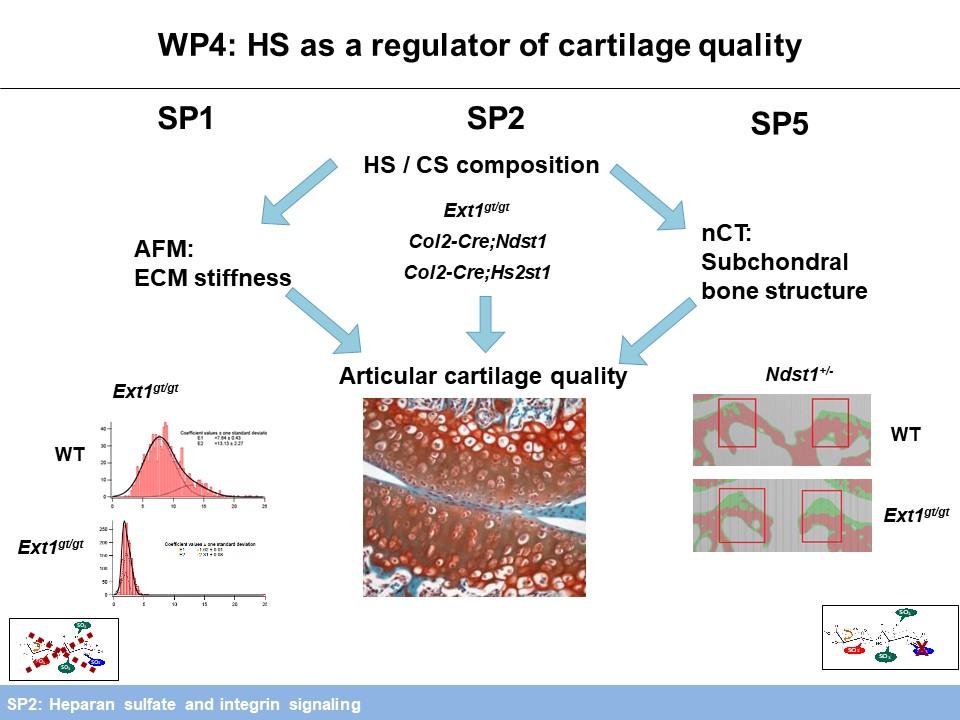 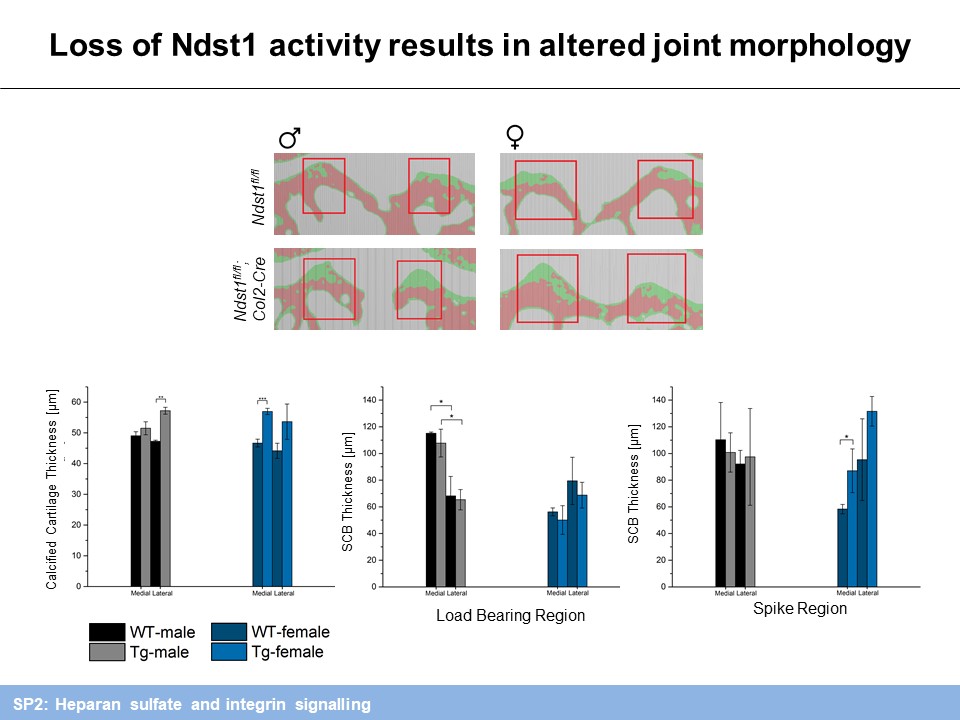 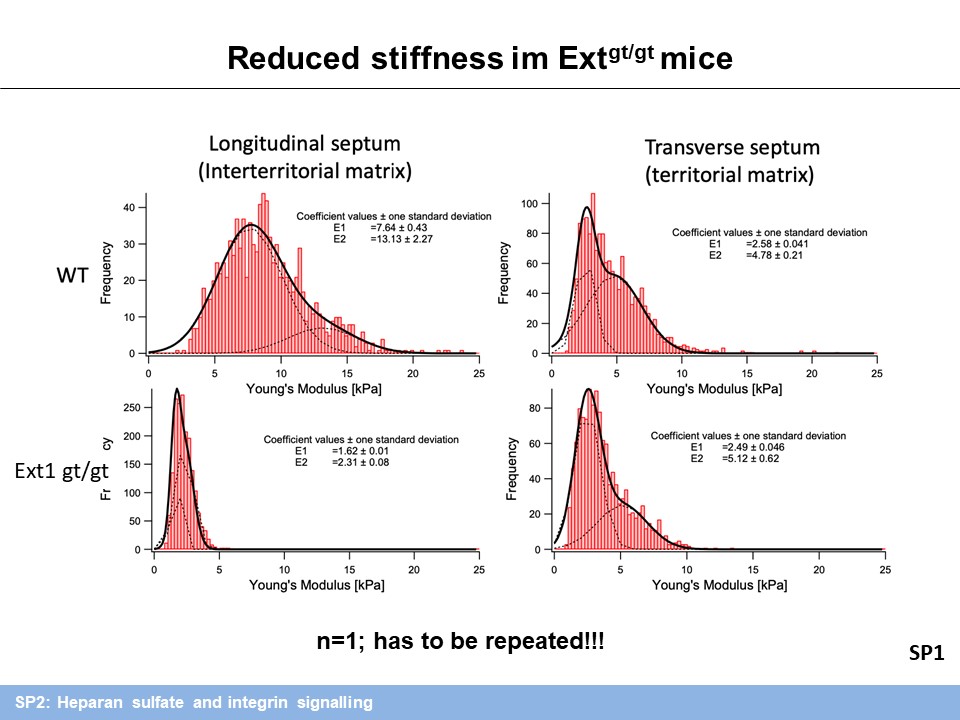 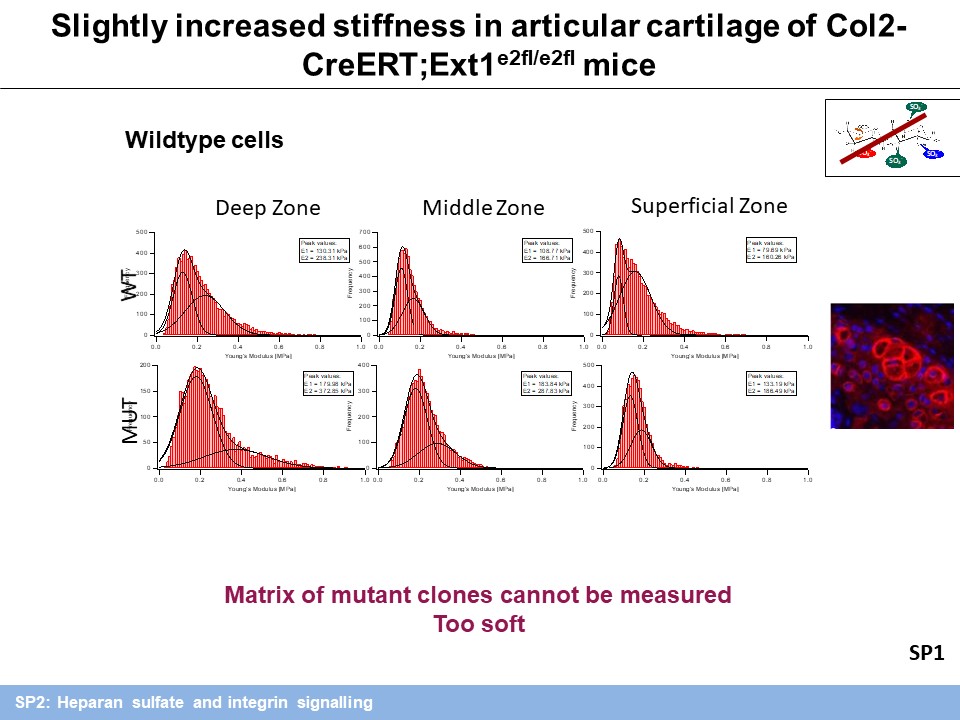 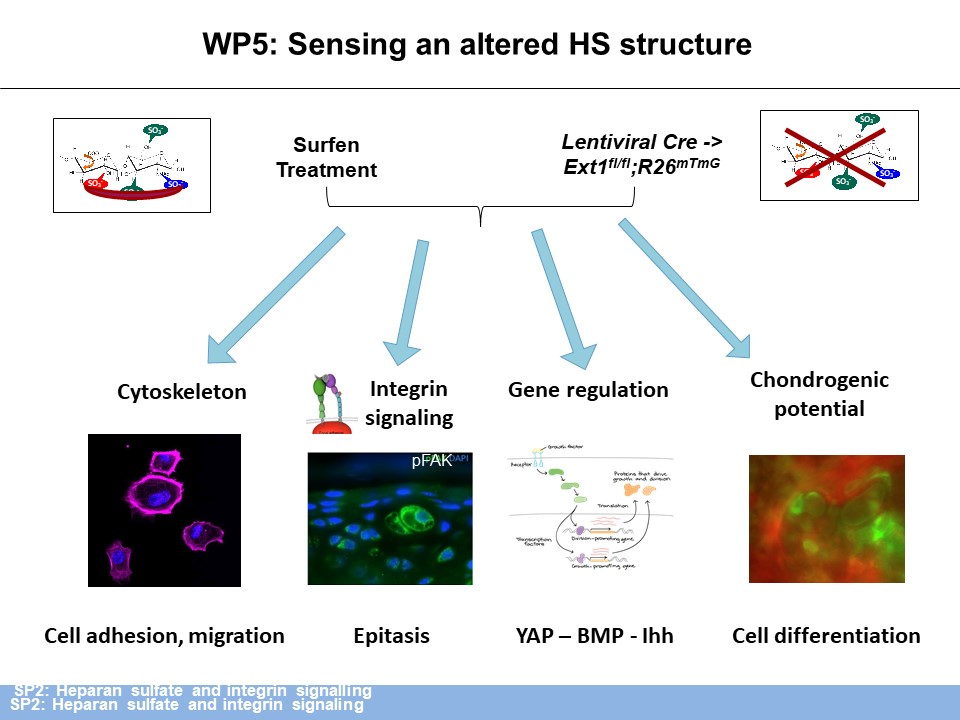 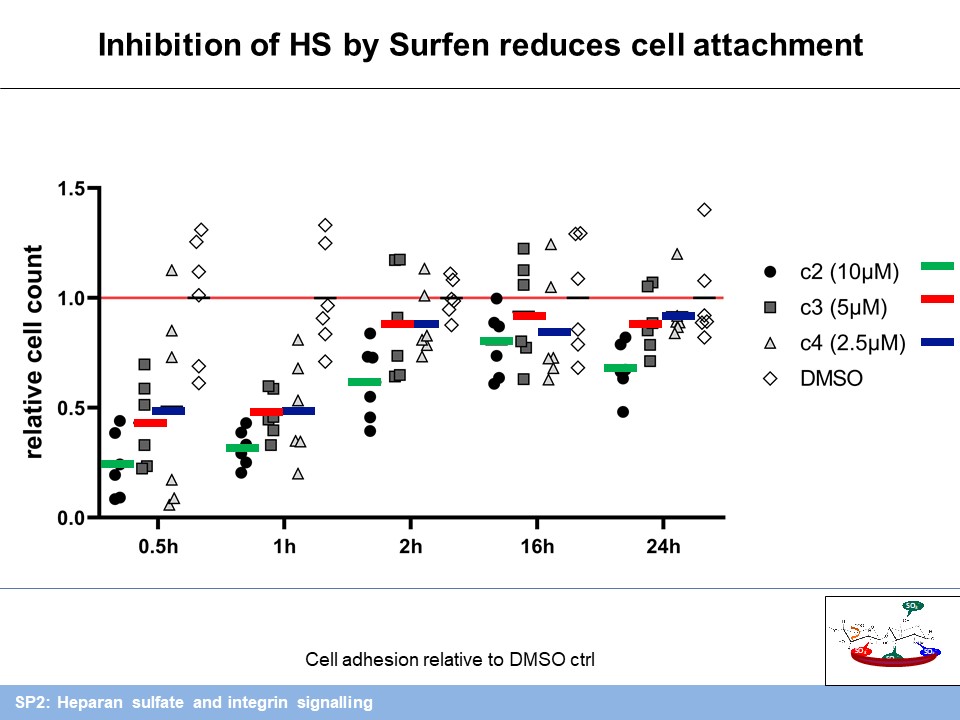 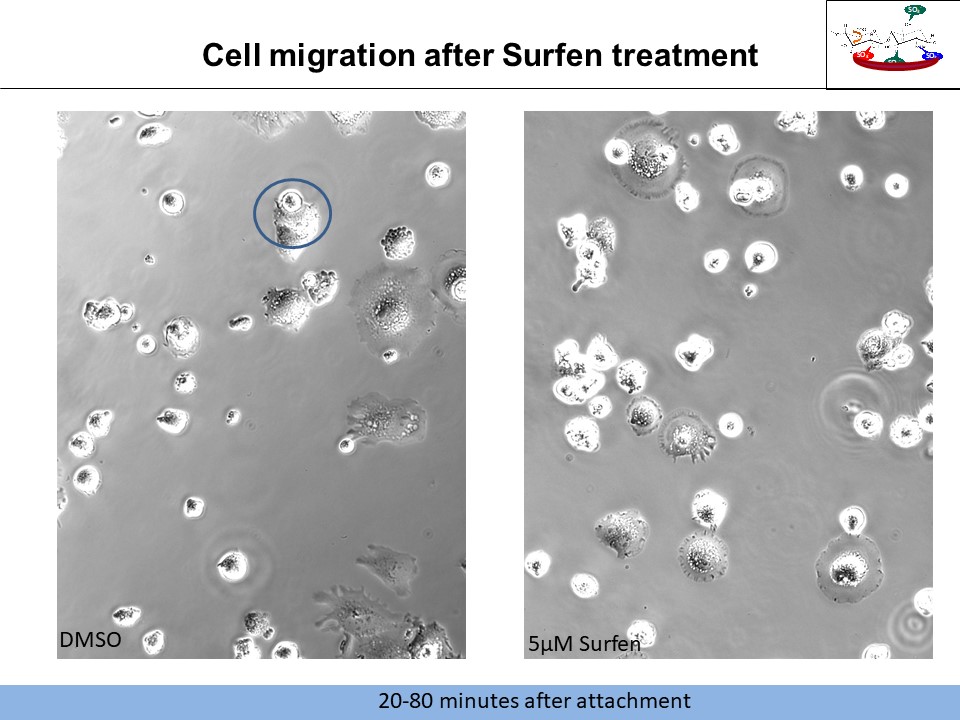 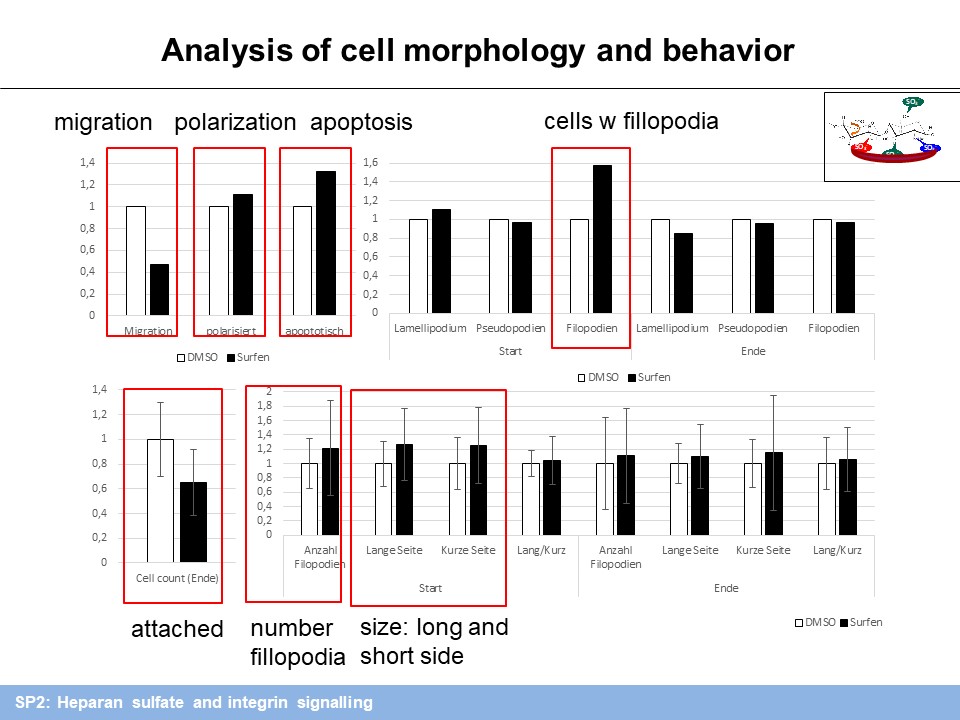 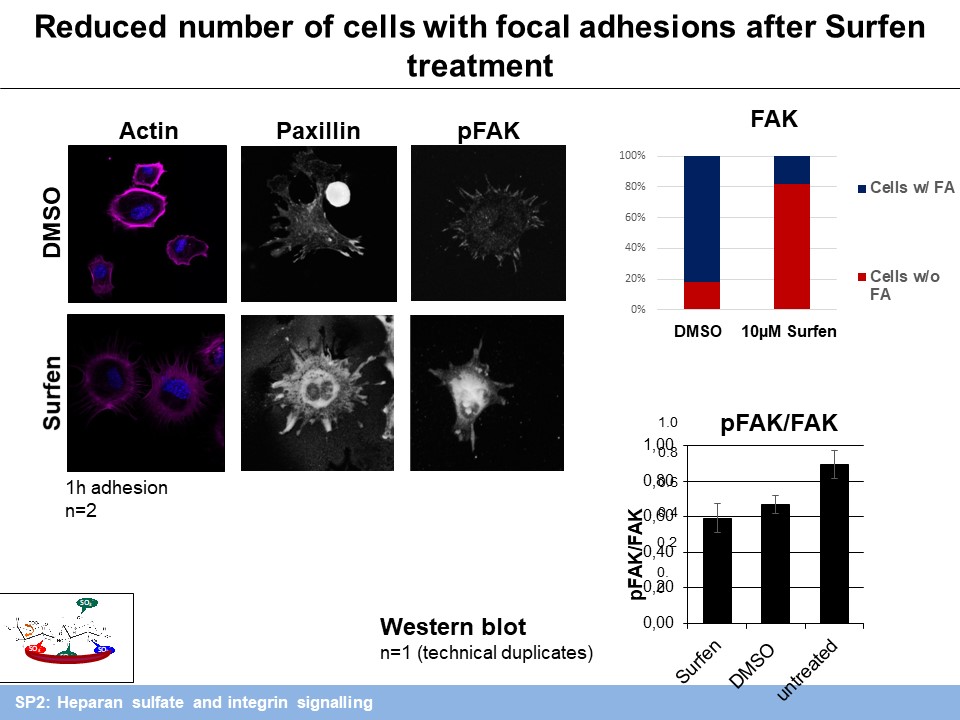 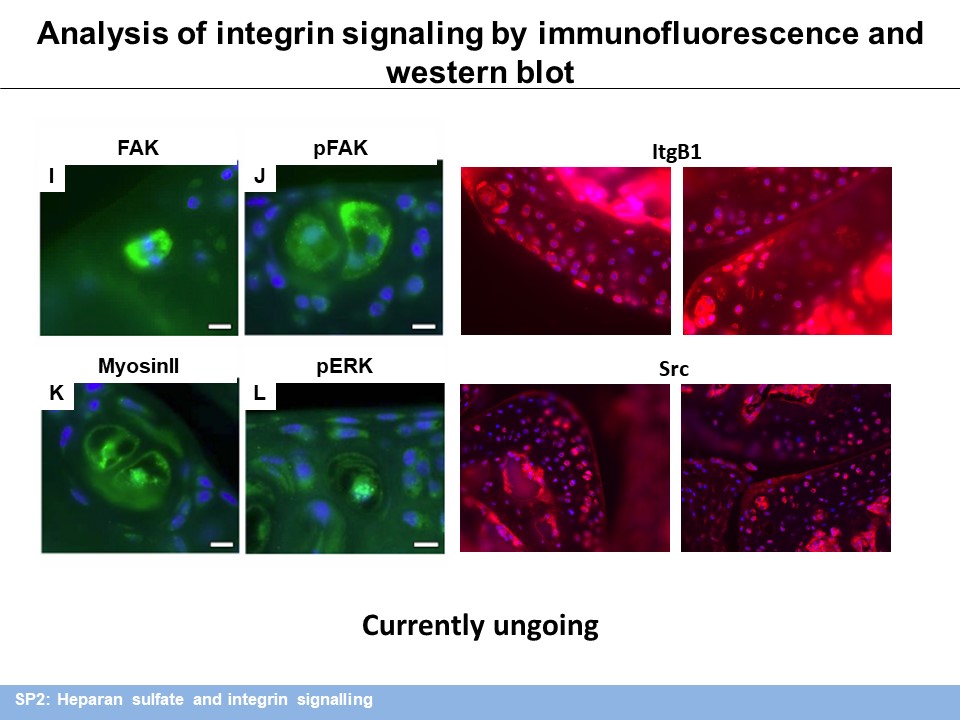 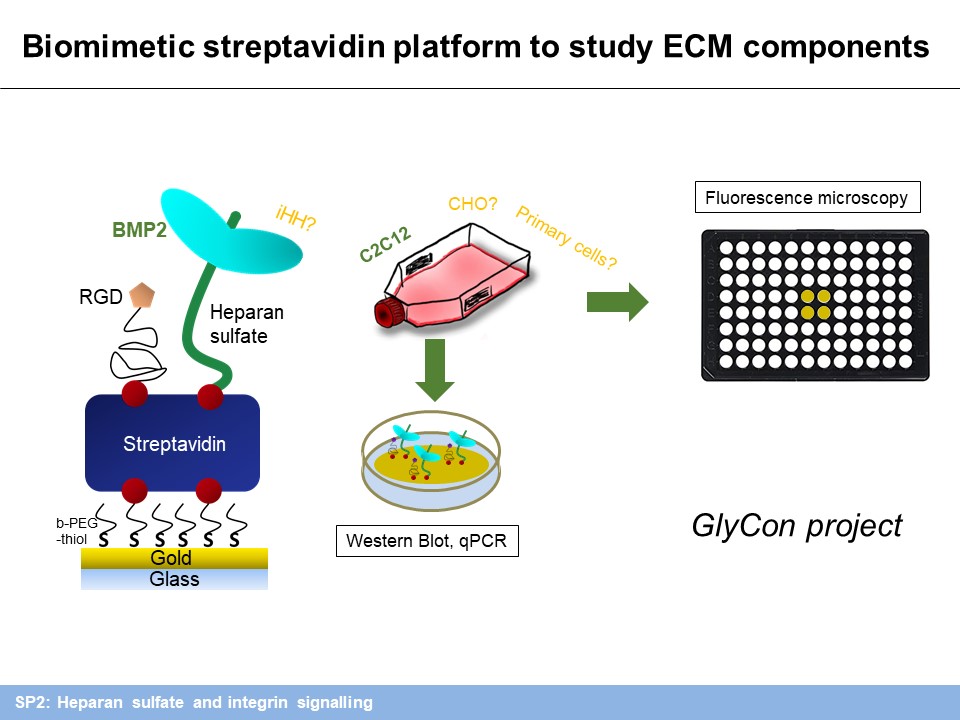 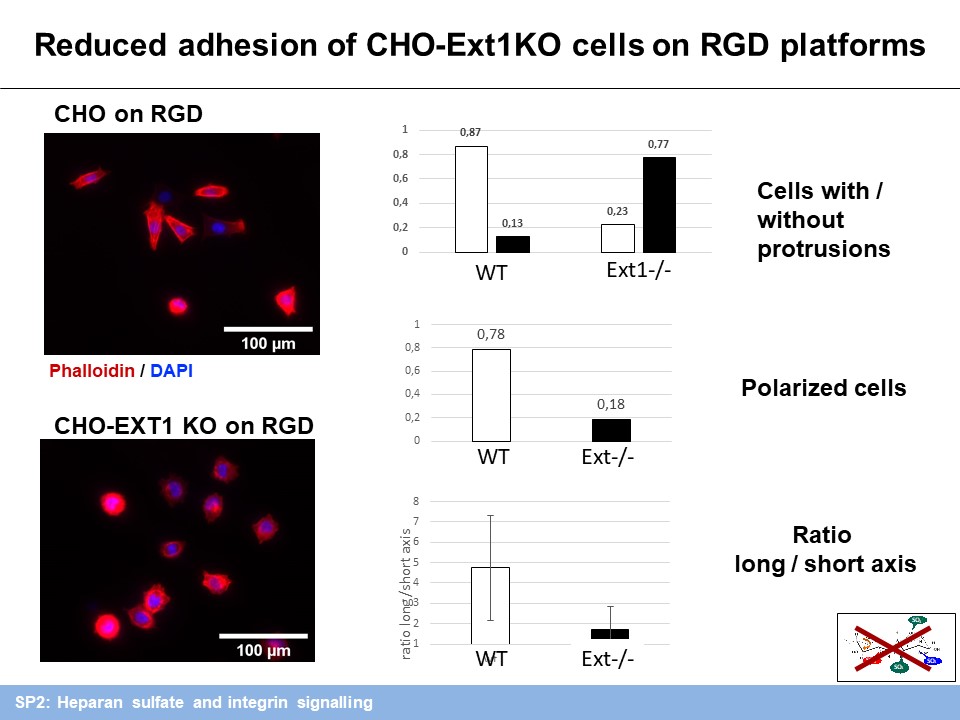 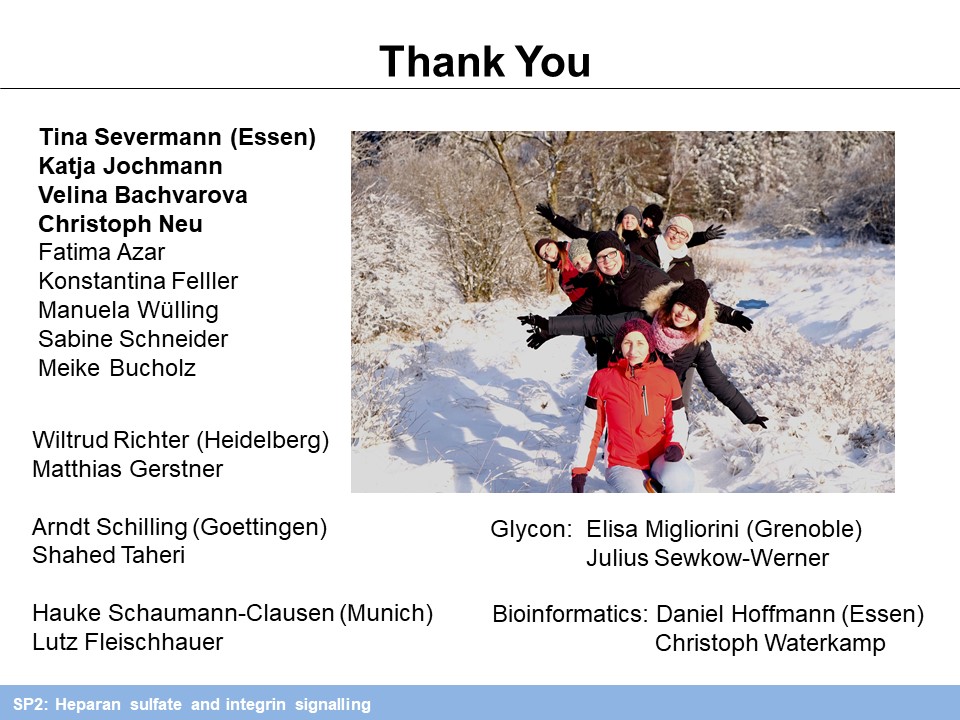 HS carrying proteoglycans (PGs) are major components of the cartilage matrix. Their biosynthesis is catalyzed by the concerted activity of multiple enzymes, including the glycosyltransferases Exostosin1 (Ext1) and Ext2, several sulfotransferases (N-deacetylase/N-sulfotransferases (Ndst) 1-4; 2-O, 3-O and 6-O sulfotransferases (Hs2st1, Hs3st1-6, Hs6st1-3) and the glucuronyl-C5-epimerase (Glce) (Figure 2).

Figure 2: HS structure and synthesizing enzymes. Mouse strains carrying deletions of genes coding for the highlighted enzymes (red) were investigated in this study.

Within the first ExCarBon funding period (SP2), we could show that the altered HS structure in Ext1gt/gt and Hs2st1-/- mice leads to an upregulation of chondroitin sulfate (CS) synthesis in both mutants and to a reduced cartilage stiffness in the embryonic growth plate of Ext1gt/gt mice (with SP1) (Figure 3).

Figure 3: Analysis of HS-deficient ECM. (A) The reduced HS level in Ext1gt/gt mice leads to a reduced Young’s Modulus of the interterritorial matrix of the growth plate at embryonic day 15. (B) Clonal loss of HS in a subset of articular chondrocytes results in increased Aggrecan and Chondroitinsulfate levels around clustered clones in adult mice. (C) Increased CS levels are also detected via RIP-HPLC in cartilage samples from Ext1gt/gt embryos.

To address the impact of an altered ECM on mechanical loading, HS deficient chondrocytes are currently being exposed to compressive mechanical stress (with SP3).Regarding the role of HS in OA progression, we investigated mice carrying a chondrocyte-specific, clonal deletion of Ext1 (Col2-rtTA-Cre;Ext1e2fl/e2fl), a chondrocyte-specific ablation of Ndst1 (Col2-Cre;Ndst1fl/fl) and mice heterozygous for a Ndst1 loss of function allele (Ndst1+/-). We found decreased OA progression during ageing and after anterior cruciate ligament transection (ACLT). Furthermore, structural alterations of joint morphology were found in Col2-Cre;Ndst1fl/fl mice (with SP5). Analysis of Hs2st1+/- and Glce+/- mice did not reveal an accelerated progression of OA induced by destabilization of the medial meniscus (DMM), but the expected protective effect of reduced HS-sulfation and epimerization could not be assessed in these comparatively mild OA model. Mechanistically, femoral head explant cultures of Ndst1+/- mutants treated with retinoic acid (RA) to mimic OA show decreased Aggrecan degradation by Mmp and Adamts proteases. In addition, collagenase activity of Mmp2 is decreased in these cultures (Figure 4).

Figure 4: OA progression and matrix degradation in mice with altered HS structure. (A) An altered HS structure protects against ACLT induced OA in Col2-rtTA-Cre;Ext1e2fl/e2fl and Ndst1+/- mice, while a potential protection of Hs2st1+/- and Glce+/- mutants could not be assessed after DMM. (B) The Aggrecan neo-epitope VDIPEN (western blot) generated by Mmp dependent degradation and the gelatinase activity of Mmp2 (zymogram) are reduced in femoral head explants of Ndst1+/- mice after RA treatment. Both proMmp2 (blue arrow) and active Mmp2 (black arrow) are present in the culture supernatant.