Role of microRNAs in cartilage function, pathology and progression of osteoarthritis

MicroRNAs (miRs) are post-transcriptional regulators of gene expression which are involved in the timely response of the cell to alterations in the environment. MiR clusters are regulated during chondrogenesis and manifestation of OA pathophysiology and have been associated with mechanosensitivity and mechanotransduction in cardiovascular biology and mechanical airway ventilation. Surprisingly little is, however, known on the role of mechanosensitive miRs in cartilage function and pathophysiology of OA. Aim of this study is to gain a better understanding of the role of miRs in mechanotransduction in chondrocytes and to identify and functionally characterize mechanosensitive miR clusters which may serve as novel diagnostic tools or putative future therapeutic targets of developing OA.

By profiling miR expression in biomechanically challenged human chondrocytes from healthy and OA cartilage compared to unloaded controls we will extract and validate mechanosensitive miRs, identify and verify putative, OA-relevant targets and characterize the function of selected miRs in chondrocytes by overexpression and knockdown experiments (Aim 1). This validated and characterized miR panel will then be further tested for diagnostic suitability in human healthy and OA cartilage samples and for differential expression in mouse and human OA models. We will analyze and functionally characterize expression of mechanosensitive miR clusters in integrin- and heparan sulfate-dependent mechanotransduction in cooperation with SP1 and SP2. Alterations in expression of our mechanosensitive miR panel will be assessed in cartilage samples during OA development in integrin-deficient mice provided by SP1 and in heparan-sulfate deficient mice provided by SP2 (Aim 2 and 3). MSC undergoing in vitro chondrogenesis which will additionally be exposed to biomechanical loading and/or to an osteoarthritic milieu, will serve as human in vitro OA model in SP7. From this model we will try to extract miRs differentially regulated by beneficial versus non-beneficial loading (Aim 5). Together with SP4 we will investigate whether miRs targeting the sensory neurotransmitter receptors NK1R and CGRP receptor are differentially expressed during the pathogenesis of OA and may hold potential to affect osteochondral regeneration and subchondral bone remodeling (Aim 4).

In the end we will, thus, have obtained new insight into mechanotransduction in chondrocytes and know whether our validated panel of mechanosensitive miRs can serve as novel diagnostic markers for OA development and may help to identify new therapeutic targets for OA treatment. 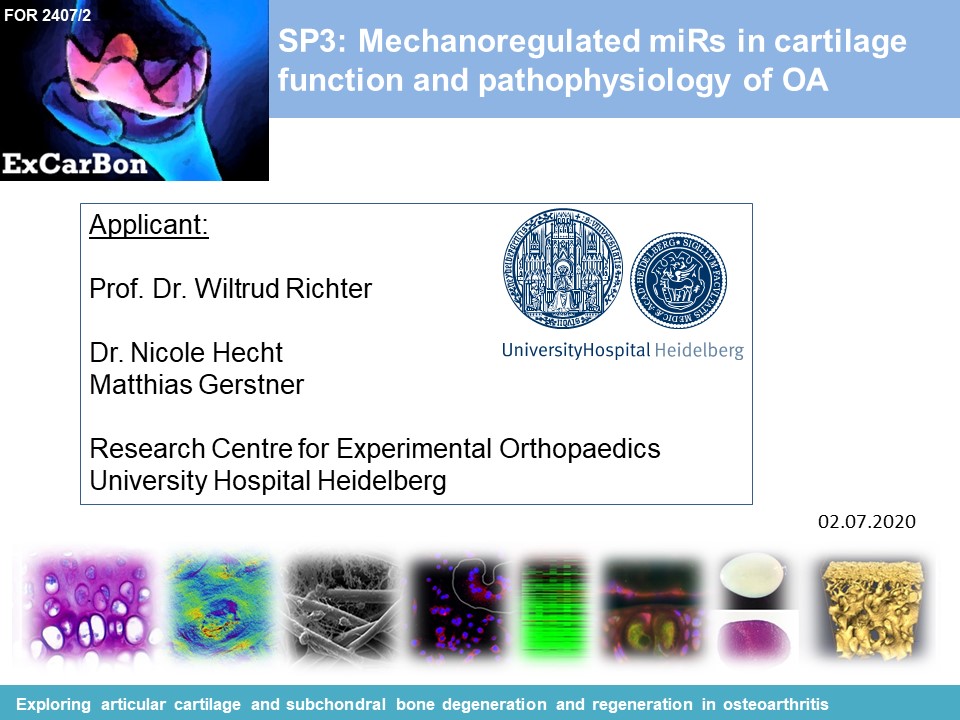 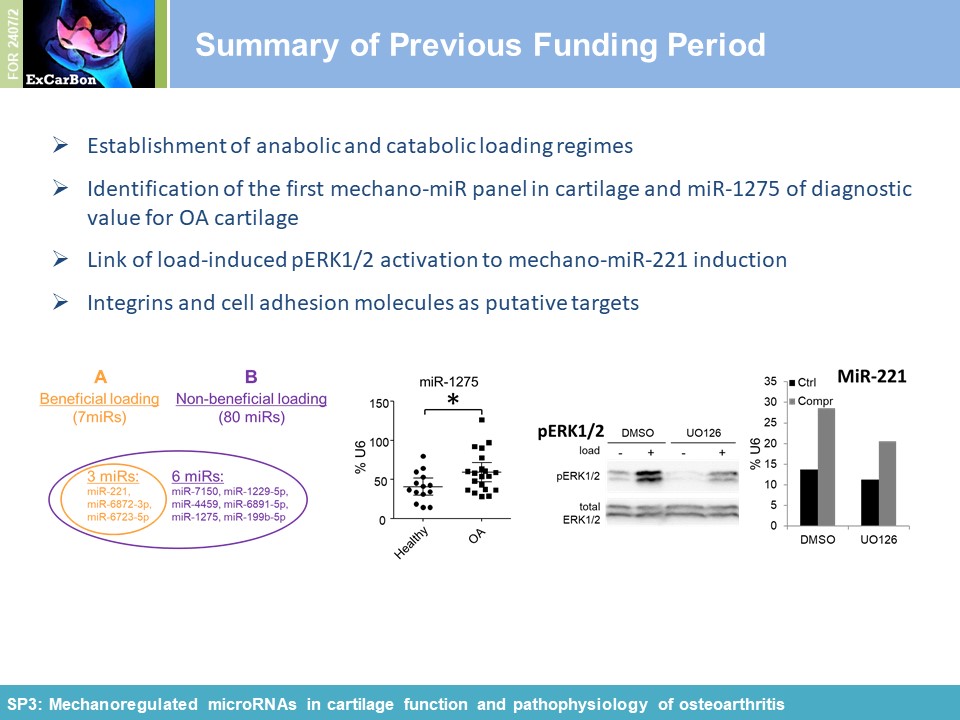 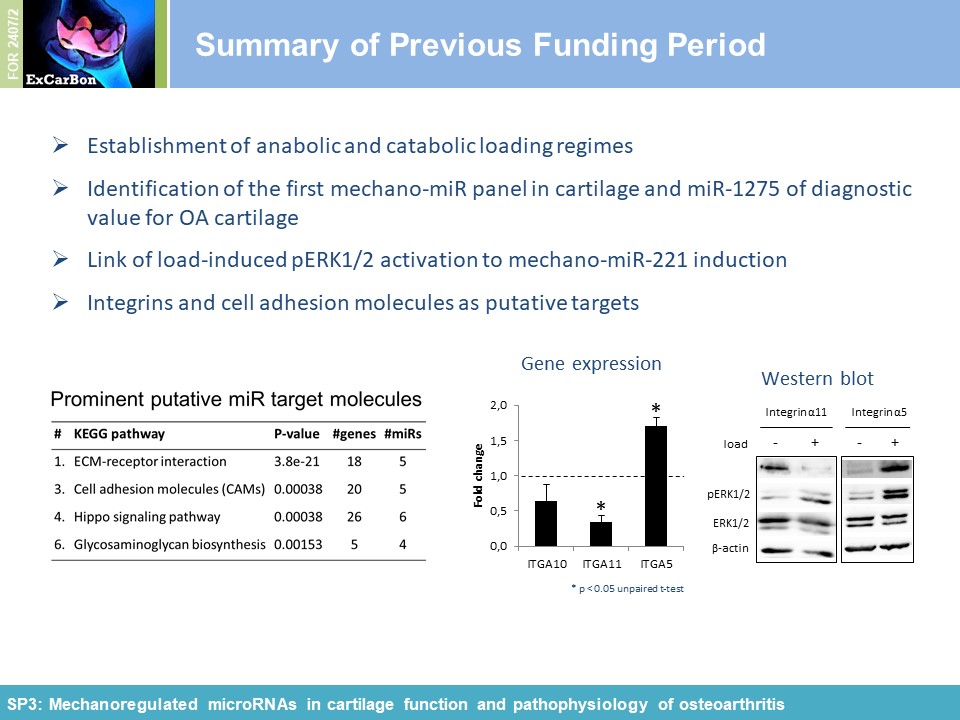 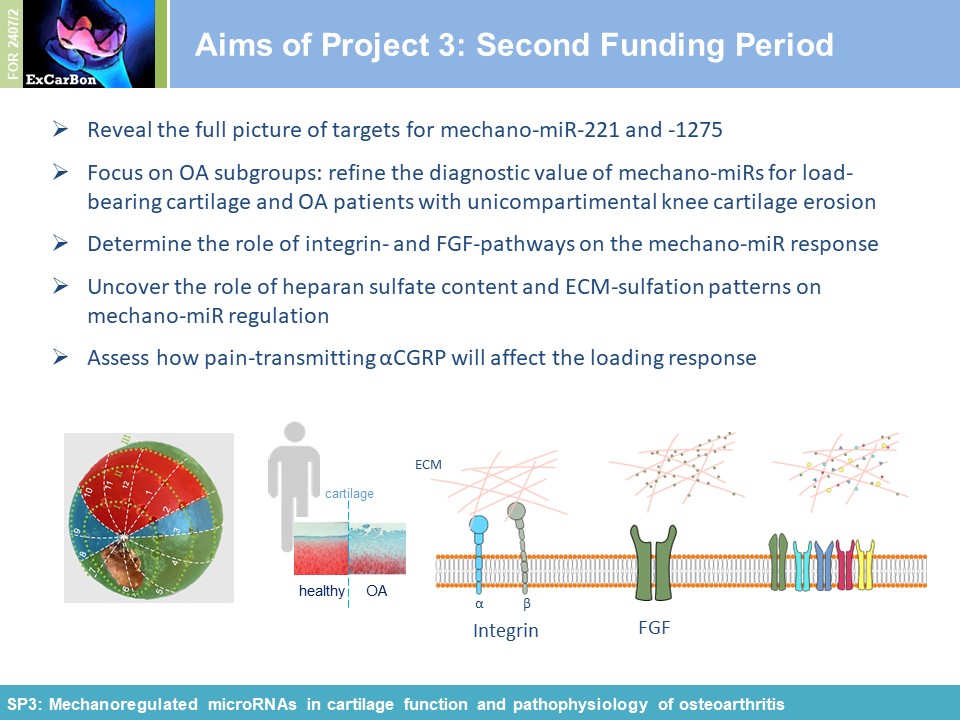 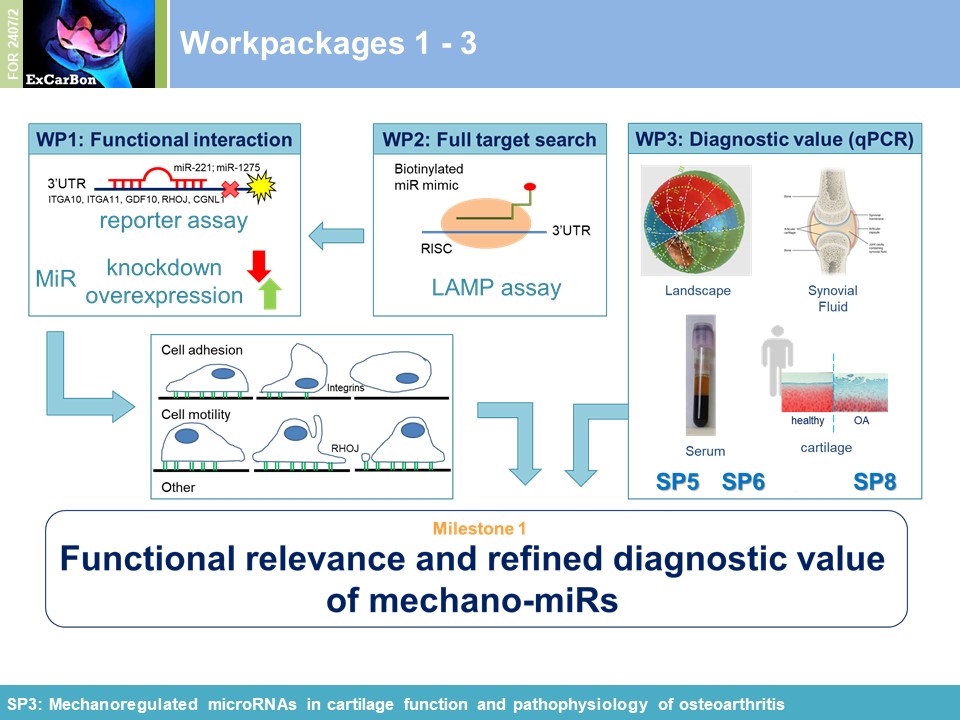 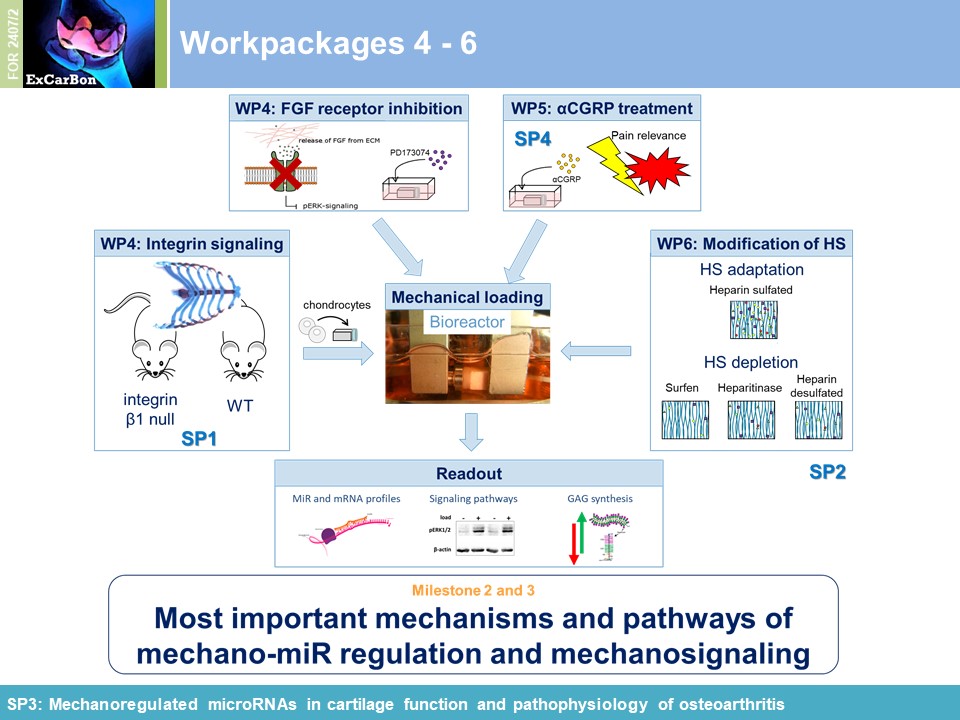 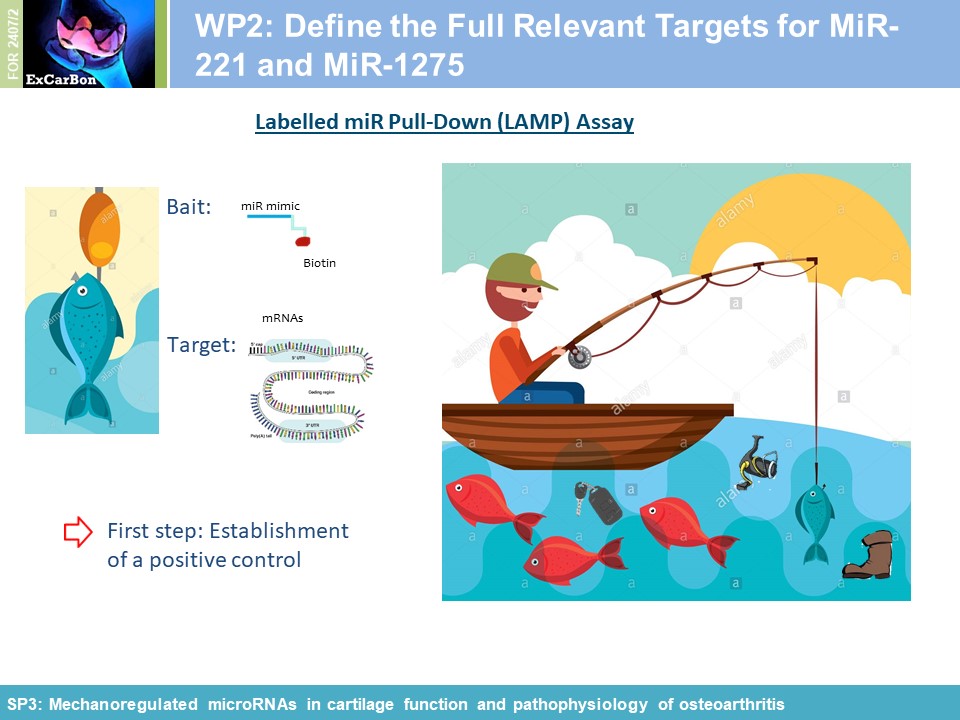 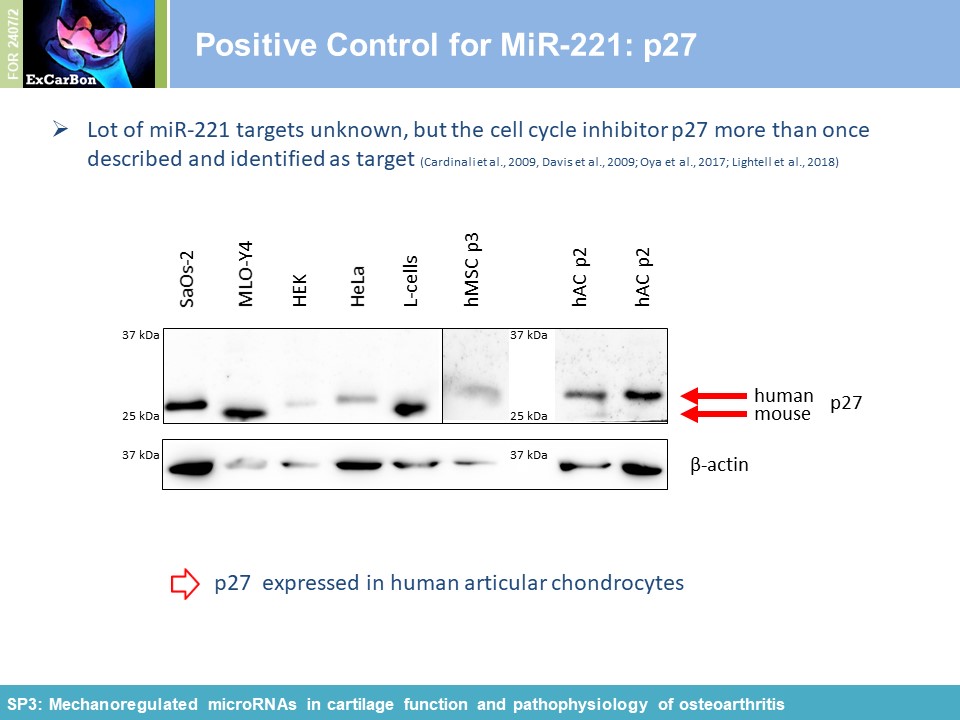 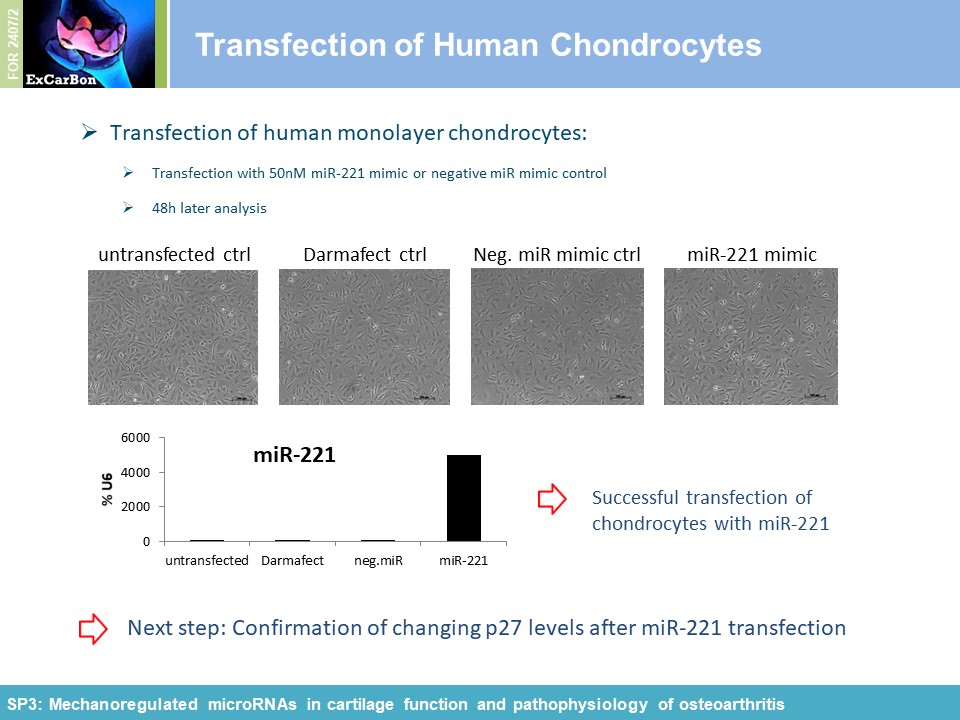 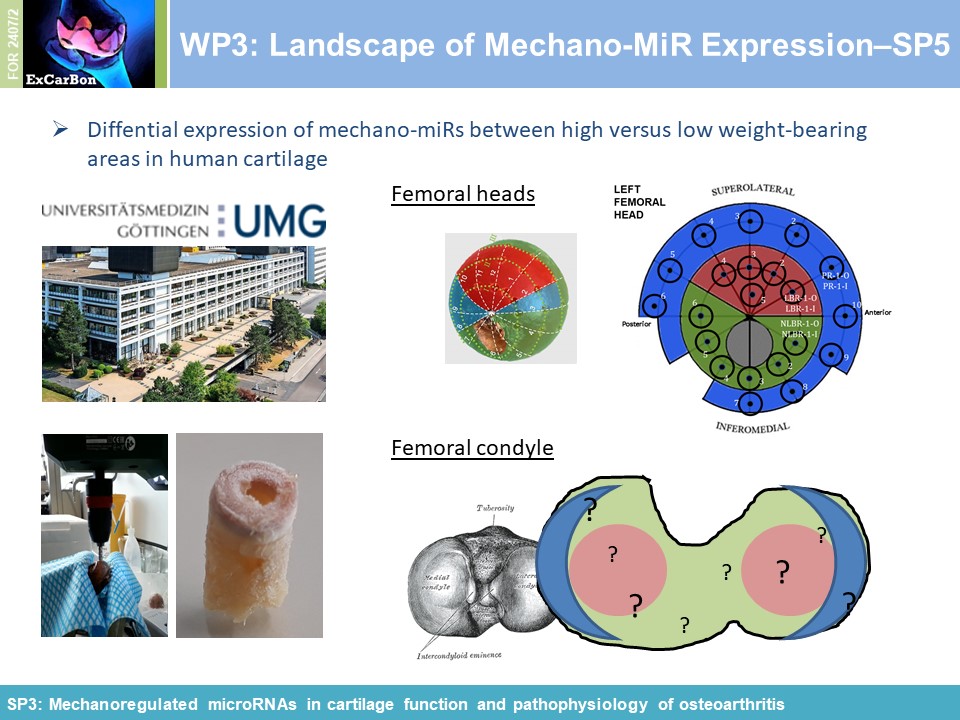 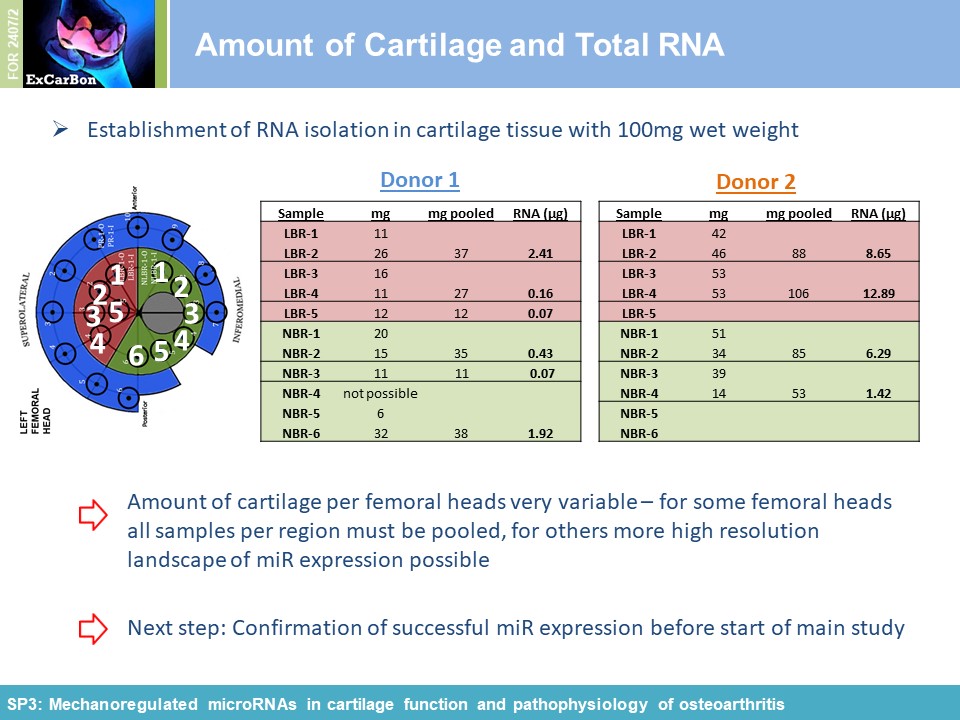 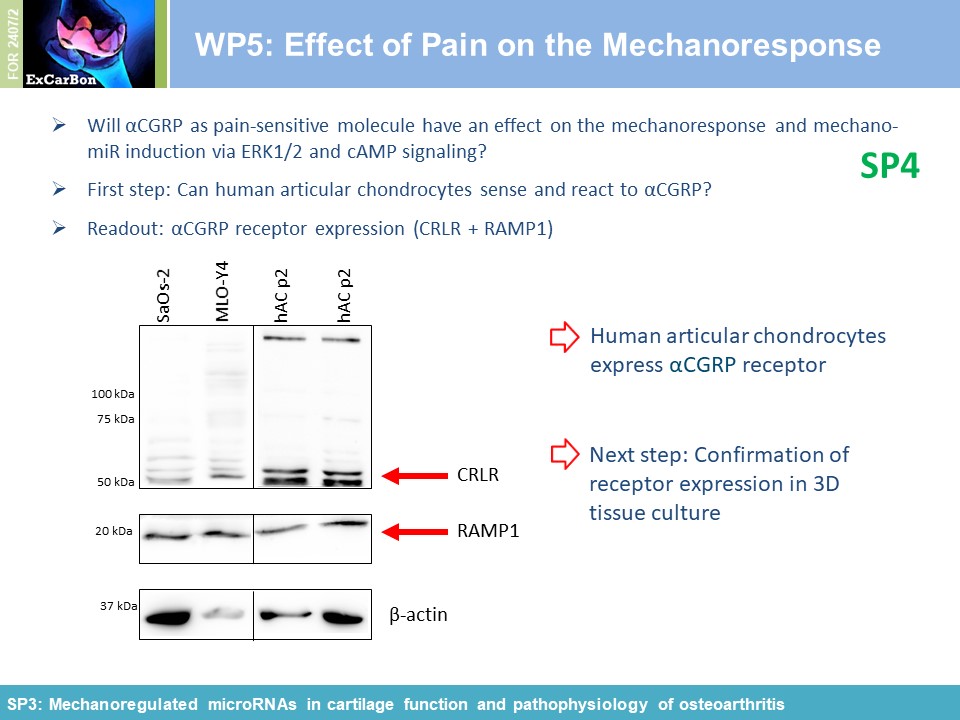 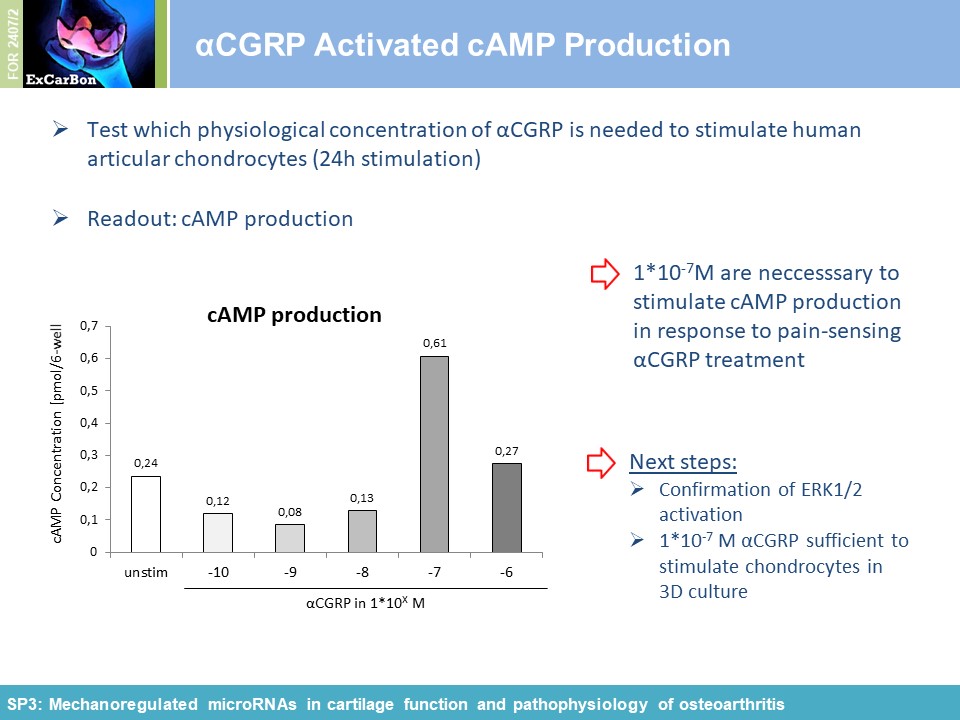 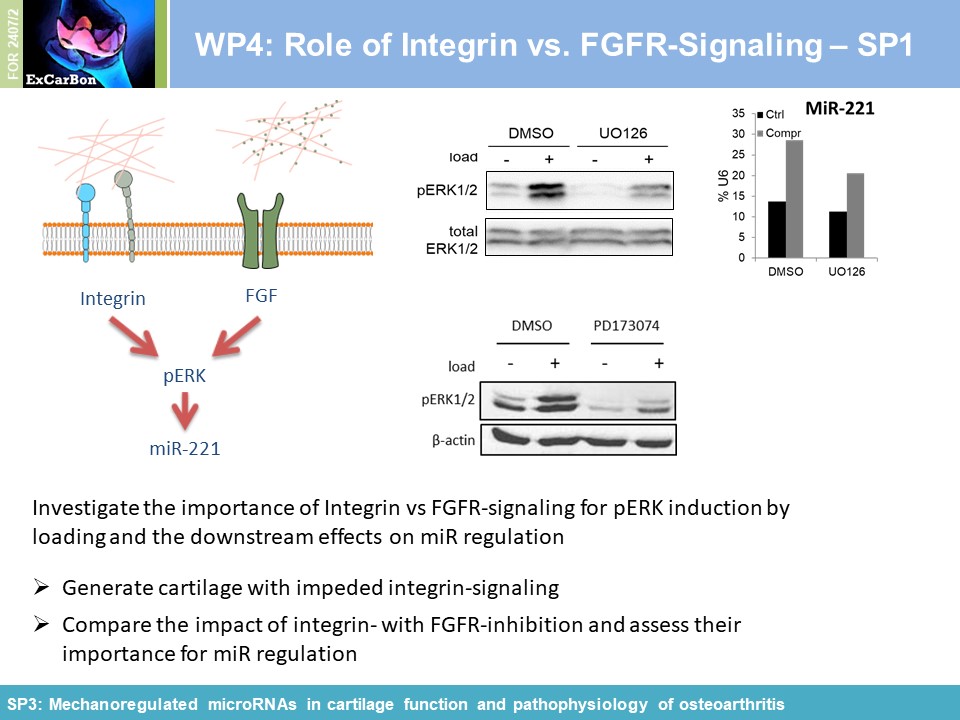 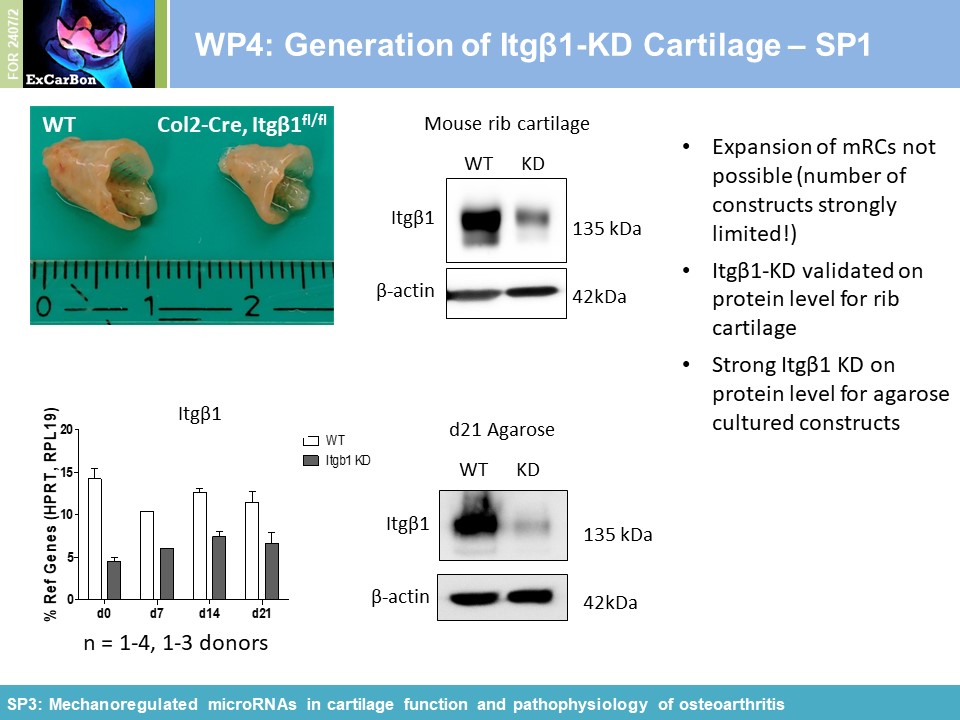 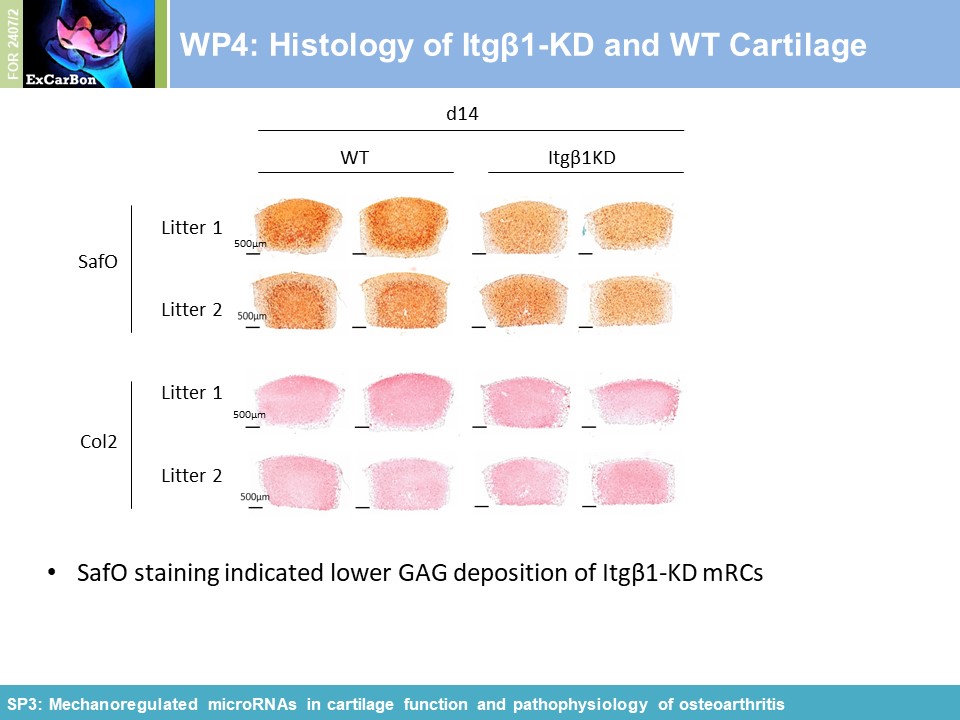 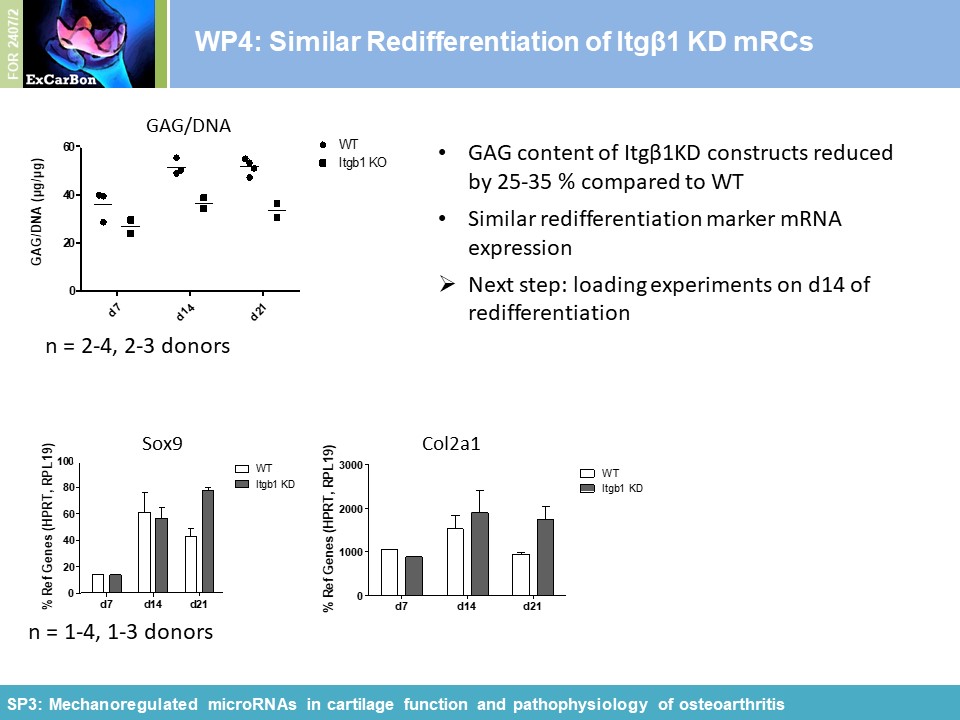 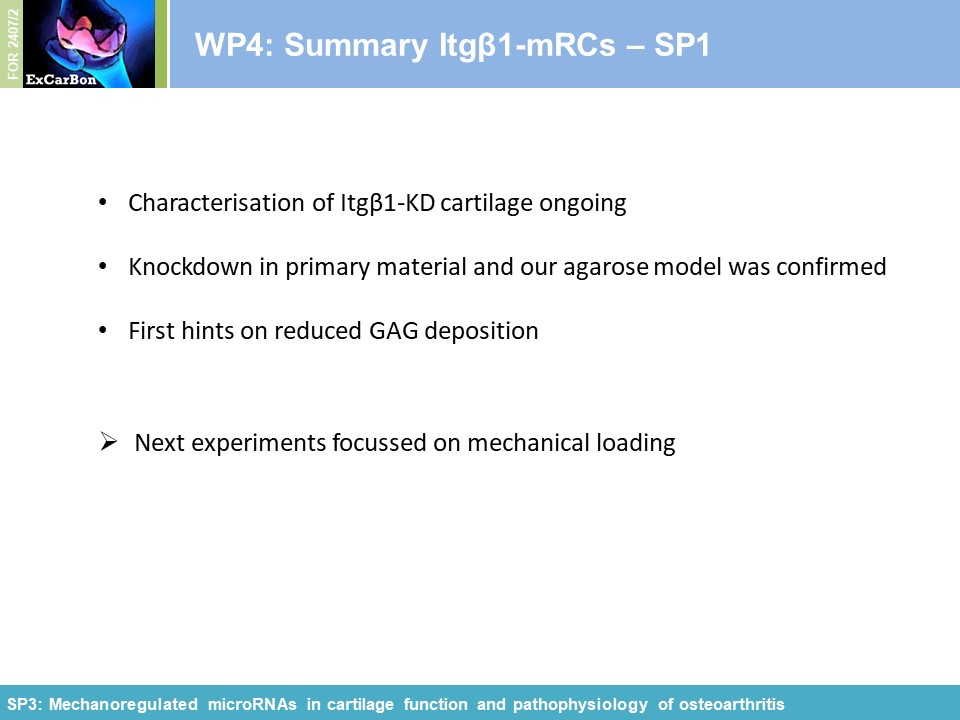 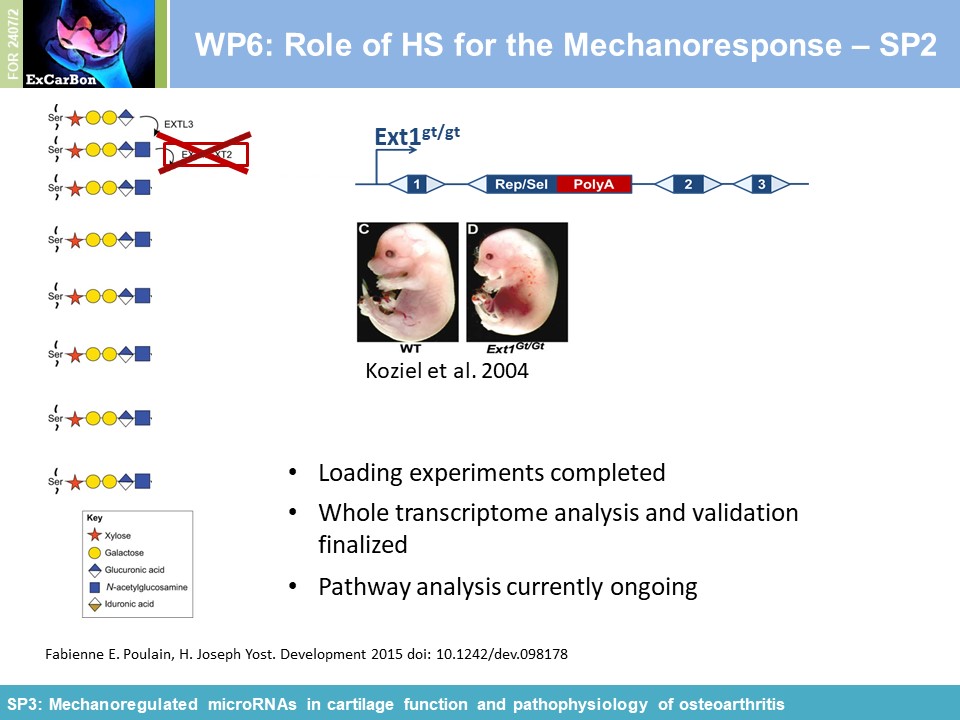 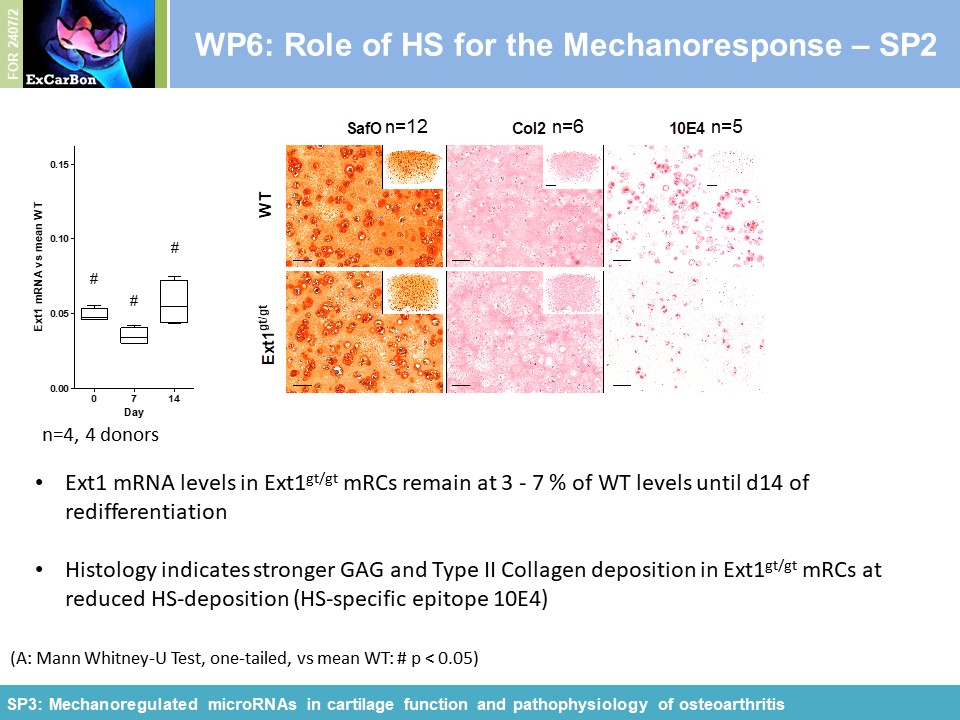 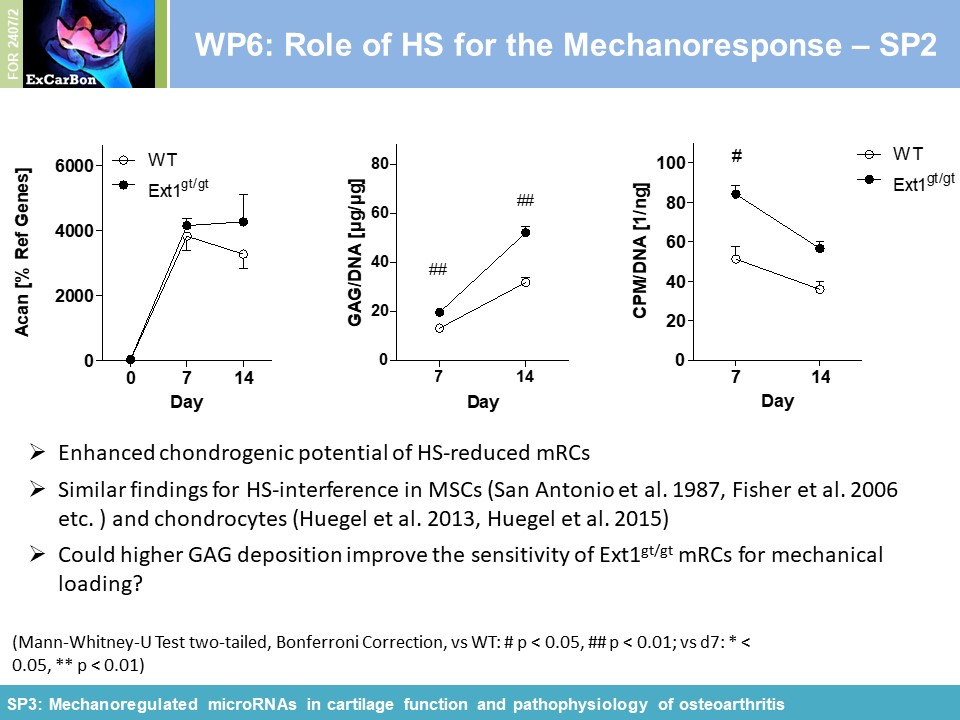 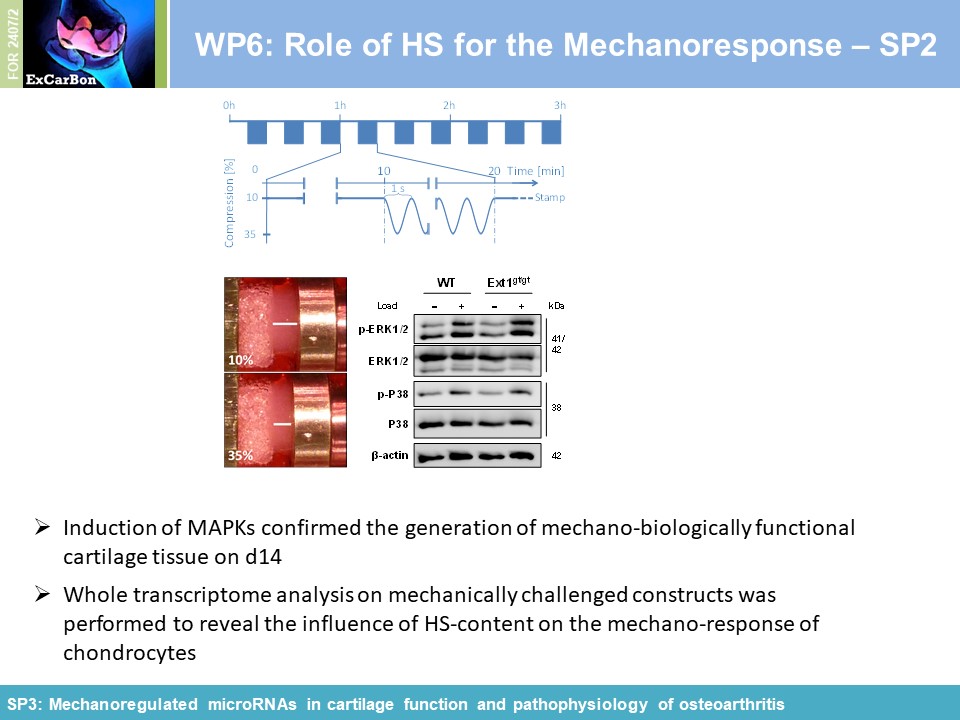 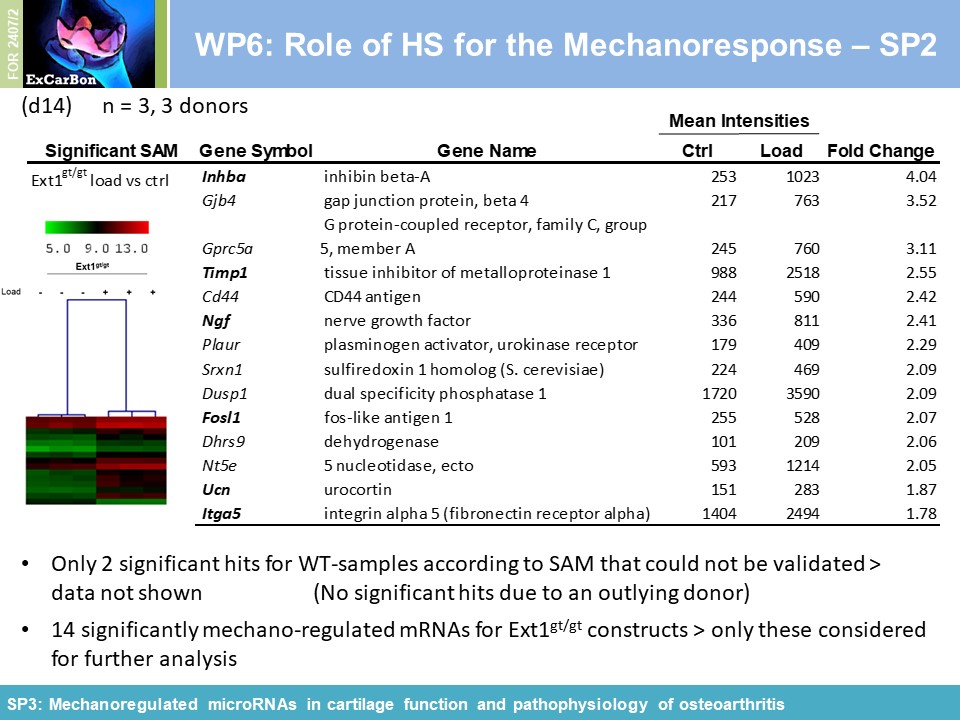 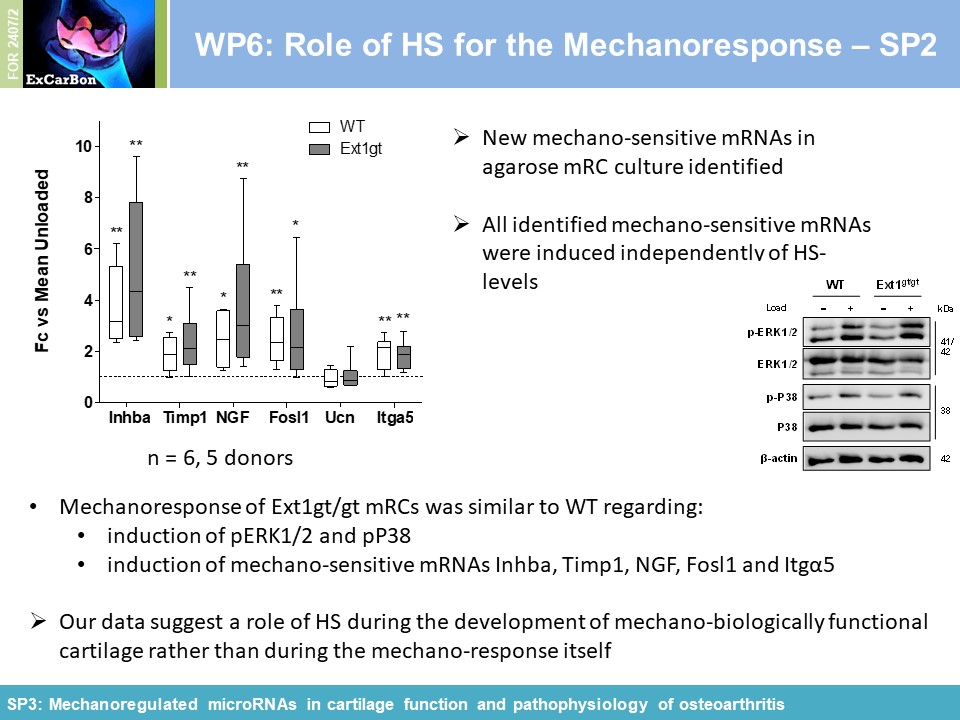 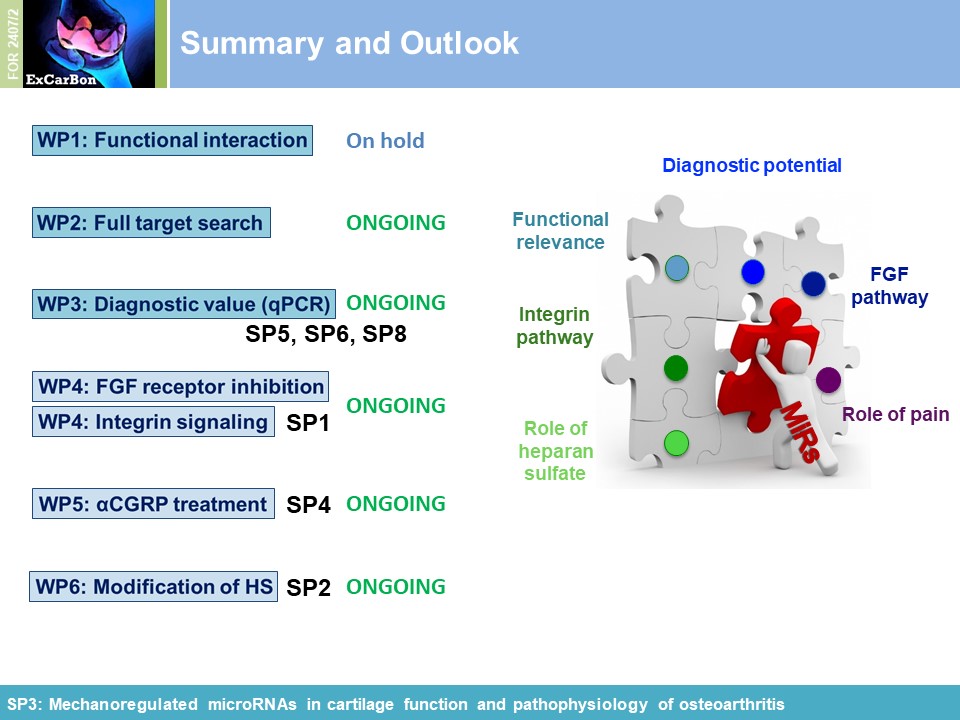 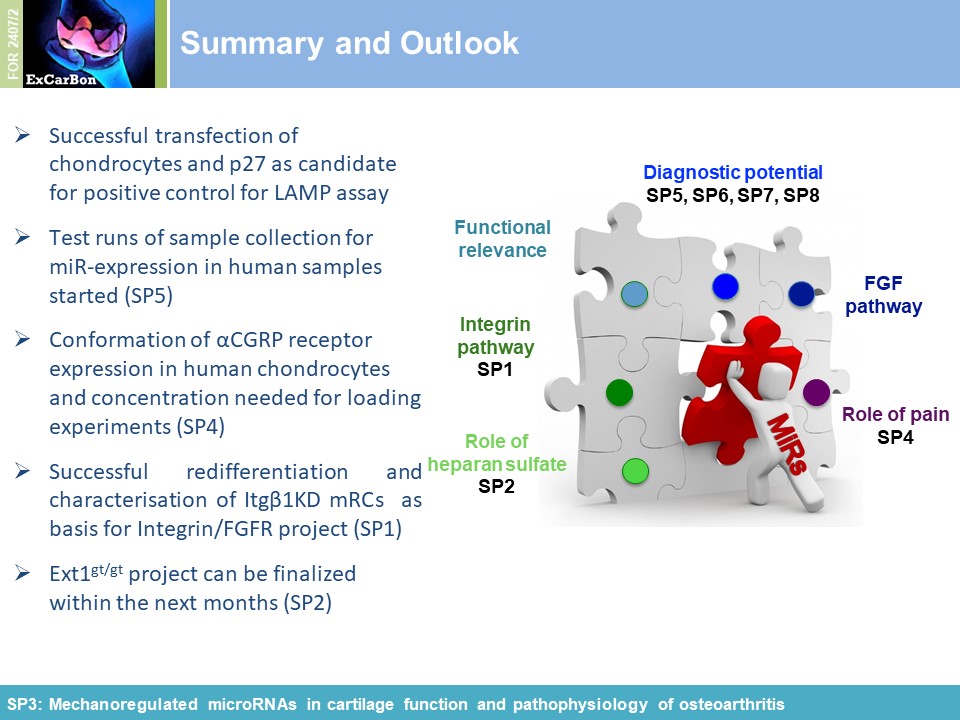 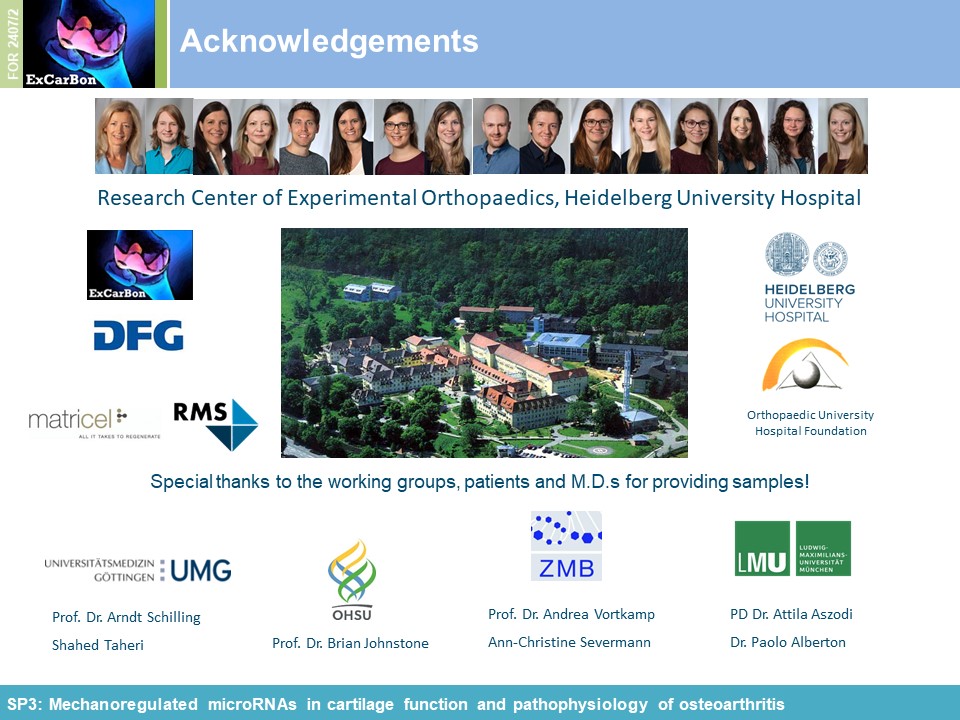 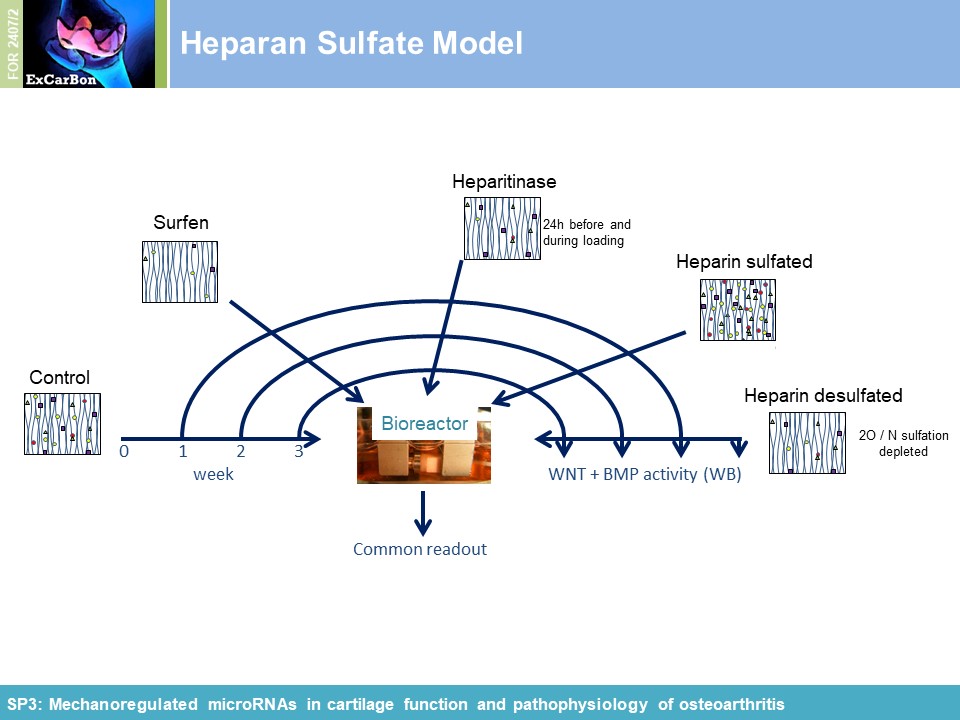 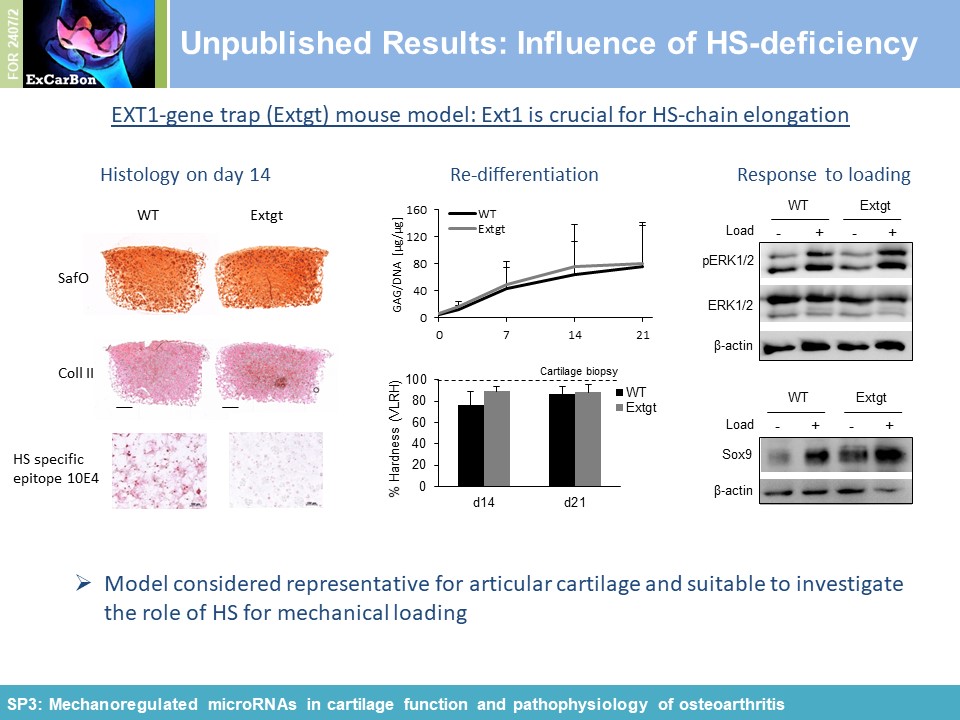 MicroRNAs (miRs) are post-transcriptional regulators of gene expression which are involved in the timely response of cells to alterations in their environment. MiR clusters are regulated during chondrogenesis and manifestation of OA pathophysiology and have been associated with mechanotransduction in cardiovascular biology and mechanical airway ventilation. Surprisingly little is, however, known on the role of mechanosensitive miRs in cartilage function and pathophysiology of OA. Aim of this study was to gain a better understanding of the role of miRs in mechanotransduction in chondrocytes exposed to beneficial versus non-beneficial loading regimes and to identify and functionally characterize mechanosensitive miR clusters which may serve as novel diagnostic tools or putative future therapeutic targets of developing OA.

In the first funding period engineered human cartilage was exposed to unconfined dynamic compression and global gene regulation was characterized compared to unloaded controls.  Over 100 genes were upregulated by beneficial loading many of which were new in this context. Amongst them were members of the MAPK-, TGF-β-, BMP-, calcium- Notch- and Wnt-signaling pathway. Load-induced gene expression changes were re-inducible in daily intervals even over 14 days with signals lasting for 2 to 21 hours depending on the gene of interest (Figure 1). Load-induced induction of Sox9 protein and pERK1/2 correlated with enhanced proteoglycan production after loading but global miR expression analysis revealed little changes immediately after beneficial loading. (Scholtes et al., 2018).

Next we addressed the role of the ECM content of engineered cartilage for the mechano-response and observed that the same loading episode produced a suppression of GAG-synthesis at low ECM-content and a stimulation of GAG-synthesis at high ECM-content. Interestingly, WNT and BMP-activity dropped with increasing ECM levels during cartilage maturation in line with a sequestration of BMP and WNT ligands by proteoglycans in the ECM. Pharmacological silencing of WNT activity allowed for higher SOX9 and a more anabolic reaction of chondrocytes to mechanical loading in ECM-poor cartilage (Figure 2) demonstrating that lowering WNT activity before and during movement can improve the mechano-response at maintained biomechanical tissue quality. WNT-activity dependent SOX9 regulation after loading has the potential to install a negative feedback loop in cartilage with low ECM content while allowing a positive feedback loop at high ECM content (Praxenthaler et al. 2018). Silencing of WNT ligands by highly sulfated proteoglycans like heparansulfate are, thus, a focus of current interest in cooperation with SP2.

When we compared global microRNA (miR) profiles in engineered cartilage after beneficial versus non-beneficial loading, a broad regulation of 80 miRs after non-beneficial loading was evident. This suggested that mechano-miRs may shape the proteome especially when cartilage is disturbed. MiRs with broader (prominent example miR-221) and narrower mechanosensitivity (prominent example miR-1275) were identified and putative target molecules were connected to ECM-receptor interaction, cell adhesion molecules, Hippo signaling pathway and glycosaminoglycan (GAG) synthesis. Interestingly, up-regulation of mechano-miR-221 depended on load-induced activation of pERK-signaling and has integrin alpha 10 as a putative target which is further investigated together with SP1. In cooperation with SP7, mechano-miR-1275 and miR-675 were confirmed as valid diagnostic marker to discriminate healthy from OA tissue (Figure 3) (Hecht et al., 2019).

Overall our in vitro model is attractive for deeper investigations of the mechanocompetence of the tissue, functional consequences of cartilage overloading and of mechano-miR-target interactions in a healthy versus an OA-cartilage context.